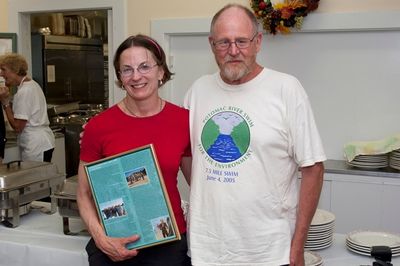 Cheryl Wagner is a 64-year-old American pool and open water swimmer and charity swim organizer for the Potomac River 7.5 Mile Swim for the Environment (Potomac River Swim), a 12 km marathon swim that crosses the mouth of the Potomac River where it meets the Chesapeake Bay and divides Virginia's Northern Neck from Saint Mary's County, Maryland. She has done the Great Chesapeake Bay Swim 15 times to date.

Participants in the 12.07 km Potomac River 7.5 Mile Swim for the Environment are required to raise a minimum of US$250 in pledges to go into a pool to equally benefit the Interstate Commission on the Potomac River Basin, the Southern Maryland Sierra Club, Chesapeake Bay Foundation, the Potomac River Association, with additional smaller contributions made to the Potomac River Conservancy, Eastern Shore Land Conservancy, the West Virginia Rivers Coalition and the St. Mary's Watershed Association. The swim began when distance swimmer Joe Stewart who uses distance swimming as a way to raise cash and visibility for charitable causes, embarked on a solo "Swim for the River's Sake," in 1993. The race began the following year. In 2001, Stewart announced that he was taking a break from race organizing, and handed the reins over to distance swimmer, Cheryl Wagner.