Lottie Schoemmell, an (Honor Swimmer) of the International Marathon Swimming Hall of Fame 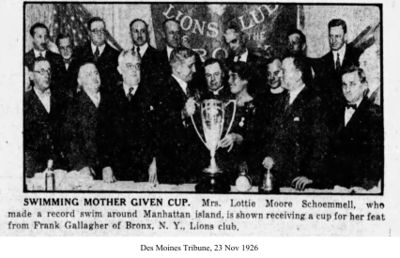 Des Moines Tribune on 23 November 1926..Mrs. Lottie Moore Schoemmell given a cup for setting a record for swimming around Manhattan Island 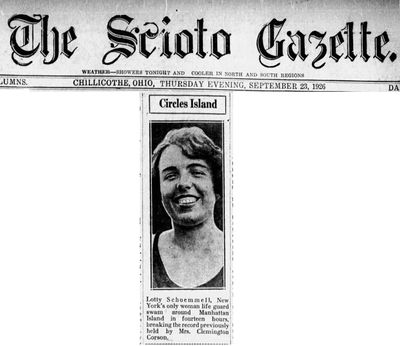 Charlotte "Lottie" Schoemmell (Lottie Moore Schoemmell) was an American open water swimmer who was inducted as an Honor Swimmer in the International Marathon Swimming Hall of Fame in the Class of 1968.

Clad in a bathing cap and a coat of black axle grease and nothing else, Mrs. Lottie Moore Schoemmell, a mother, climbed out of New York Harbor into a sheet held by her sister, while whistles screeched and 200 rain-soaked persons hailed her with cheers. She had swum from Albany to the Battery (160 miles) in 57 hr. 11 min., swimming time, beating by 6 hr. 24 min. the record made in 1921 by Mrs. Corson.* She lost 4 pounds, used 72 pounds of fat, ate lumps of sugar soaked in whiskey.

Lottie Schoemmell was a member of the International Professional Swimmers Association founded in 1927 in New York City.