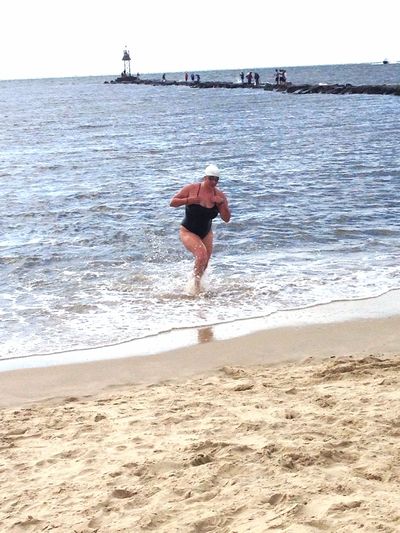 Charlotte "Charley" Samuels is an American open water swimmer from Ridgewood, New Jersey who has competed in the Brooklyn Bridge Swim, Governors Island Swim, Little Red Lighthouse Swim, and the Statue of Liberty Swim, and is the youngest person in history to complete the Triple Crown of Open Water Swimming.

She is the CEO and Founder of deepwaterswimmer.tumblr.com and author of Earth & String, published in 2016.

"English Channel, Catalina Channel, Manhattan Island cast large shadows in the marathon swimming world. These are the proving grounds sought by many. Charlotte Samuels, a 16-year-old high school student, achieved this monument of marathoning with two impressive 20+ hour channel crossings that captured the attention of the American media. She addressed inquiries with mature aplomb and unusual maturity as the youngest person to achieve the Triple Crown of Open Water Swimming with her circumnavigation of Manhattan Island, her crossing of the English Channel, and her crossing of the Catalina Channel. For her ability to eloquently explain the trials and challenges of marathon swimming to people of all ages from school children to the New York media, for completing her chosen goal of completing the Triple Crown at a young age, for extraordinarily 20+ hour channel crossings without hesitation and unusual courage, Charlotte Samuels’ Triple Crown is a worthy nominee for the 2014 World Open Water Swimming Performance of the Year."

Samuels was named to the list of 2015 World's 50 Most Adventurous Open Water Women by the World Open Water Swimming Association.

Samuels was named to the list of 2017 World's 50 Most Adventurous Open Water Women by the World Open Water Swimming Association. The women are listed below, alphabetically by last name: