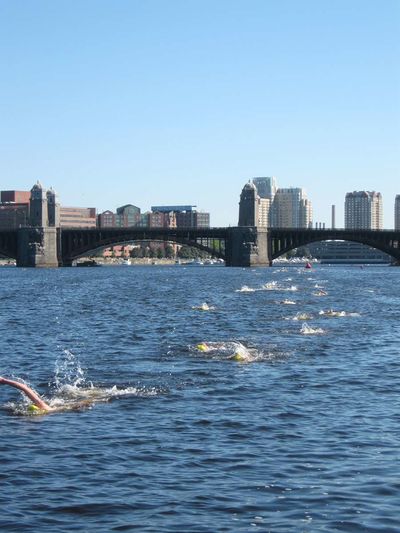 President – Frans Lawaetz is a Virgin Island native has been playing on the Charles since moving to Boston in 2000 – usually on a windsurfer or sailboat or running alongside the river on the Esplanade. By his estimation he has, via windsurfing, been immersed in the Charles at least fifty times. His day job involves systems integration and network security.

VP & Race Director – Ulla Hester came to Boston from Germany via California. After training in the Danube in Vienna, participating in the Alcatraz swim in San Francisco and swimming the Hudson River in New York City, the Charles River seemed like the logical next step. A swimmer, triathlete and chocolate lover in her spare time, she is an urban planner in her day job. Ulla currently swims with the Cambridge Masters team.

Team Member - Tom Gastel lived in San Francisco where he would swim at an urban beach a short ten minute bike ride from work and when moving to Boston thought “why not here?” He hopes one day there will be a great song about the Charles River called “Love that Clean Water” and knows that the Charles River Swim is one step toward that goal. When not swimming Tom does architectural illustrations.

Board Member – Karen Greene served as Project Director for the Charles River Conservancy from 2009 to 2012 where she coordinated the work of the Charles River Water Quality Commission to study the feasibility of returning public swimming to the Charles River. She swam in her first Charles River Swim Race in 2011 and will be swimming again in 2013. Karen is now the Foundations Manager with Ceres, Inc. where she cultivates foundation relationships and manage a portfolio of foundation grants.When not working or swimming she enjoys spending time outdoors with her husband, two sons, and their yellow Lab Jersey.