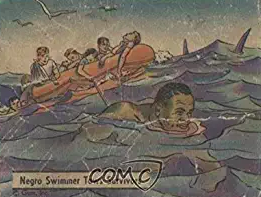 Charles Jackson French was the first black individual to win the U.S. Navy Medal for heroism as his role of a 'Negro mess attendant' from Foreman, Arkansas. He was known as a human tugboat.

At the age of 23, French was commended by Admiral William Halsey, Jr. and awarded the Navy Medal in 1943 for swimming up to 8 hours while pulling a raft filled with 15 wounded (white) sailors to safety, after their ship was sunk by the Japanese off the Solomon Islands. The raft was drifting toward Japanese occupied territory and if it had washed ashore, the sailors would have either been taken prisoners of war or killed. The raft was eventually rescued at sea by an American boat.

His letter of commendation from the commander of the Southern Pacific Fleet read, “For meritorious conduct in action while serving on board of a destroyer transport which was badly damaged during the engagement with Japanese forces in the British Solomon Islands on September 5, 1942. After the engagement, a group of about fifteen men were adrift on a raft, which was being deliberately shelled by Japanese naval forces. French tied a line to himself and swam for more than two hours without rest, thus attempting to tow the raft. His conduct was in keeping with the highest traditions of the Naval Service.”