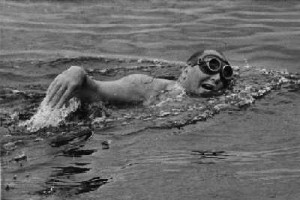 Gerald Forsberg, long-time President of the Channel Swimming Association between 1963 and 1997 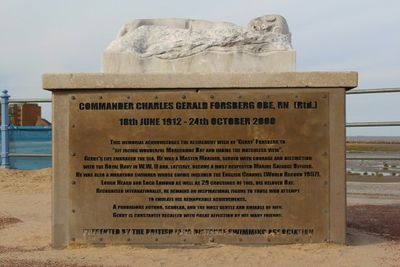 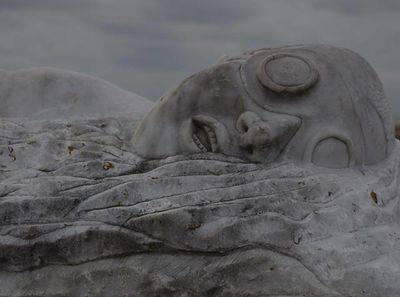 Sculpture of the Memorial to Commander Charles Gerald Forsberg in Morecambe, England

From his early days as a young swimmer and water polo player to his years as an octogenarian, this giant of a man spent his whole life in, under or on top of water - salt and bitter to the taste or fresh and freezing to the touch. A man of prodigious memory not only achieved tremendous success as a competitor and athlete in long distance swimming but also became the guiding light to hundreds of thousands of readers in his books and magazines about marathon swimming. Gerald Forsberg, known as Gerry in the marathon swimming circles, has been one of the greatest single influences in promoting long distance swimming.

In 1957 at the age of 45 he set the England-France cross Channel record. Two weeks later he won the British Long Distance Swimming Association’s Windermere Championship even though he was the oldest competitor in the event.

In 1963 he was appointed the President of the Channel Swimming Association, a position he served until 1997. In 1965 he was inducted into the International Marathon Swimming Hall of Fame as an Honor Swimmer.

He would go on to be the Senior Selector for the International Marathon Swimming Hall of Fame for 26 years and in 1977 was appointed Member Emeritus of the Selection Board. He was awarded the Harold Fern Trophy by the English Amateur Swimming Association for being the male person who has made the most outstanding contribution to swimming at the national or international level over the years.

The British Long Distance Swimming Association Handbook describes him as "a short, aldermanic figure who hasn't touched his toes in 15 years. Favorite posture is with pipe in one hand, a pint in the other, pontificating on swimming." He talks as plainly with the Queen as he does with the aspiring open water swimmer. He was one of long distance swimming's greatest ambassadors.

For 41 years, his monthly column in Britain's Swimming Times "Long Distance Swimming" was worldwide and contained every bit of news, gossip, advice and information a person could want. It served to inform and inspire those involved in open water and marathon swimming. His openness, choice of words and British humor are what made him one of the most sought after writer by readers of the sport and around the world.

In 1998 he was the recipient of a further honor being inducted as a Pioneer Contributor into the International Swimming Hall of Fame.

In 1971 he was presented the Irving Davids / Captain Roger W. Wheeler Memorial Award for Meritorious Service to Long Distance Swimming.