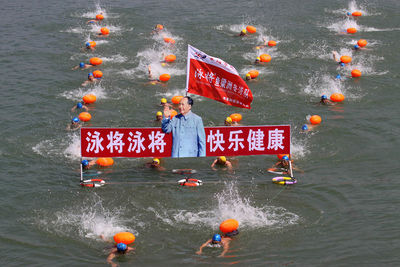 1200 swimmers celebrated the 49th anniversary of the crossing of the Yangtze River in China by Mao Zedong (shown in photo on banner). Photo by People's Daily on 12 July 2015.

Yangtze River or Chang Jiang is the longest river in Asia, and the third longest in the world. It flows for 6,418 kilometres (3,988 miles) from the glaciers on the Qinghai-Tibet Plateau in Qinghai eastward across southwest, central and eastern China before emptying into the East China Sea at Shanghai. It is also one of the biggest rivers by discharge volume in the world. The Yangtze drains one-fifth of the land area of the People's Republic of China (PRC) and its river basin is home to one-third of the PRC's population.

Along with the Yellow River, the Yangtze is the most important river in the history, culture and economy of China.