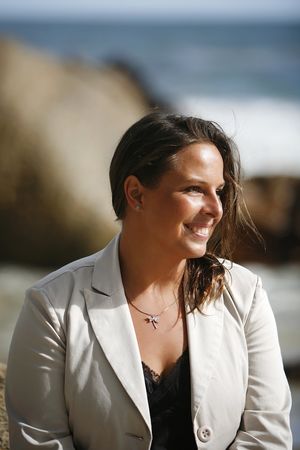 Cecilia Schütte is an extreme open water swimmer and community worker. She appeared in the book Message of Hope.

Over the years she has used every opportunity that arose through her swimming endeavours and other avenues, to raise funds for those less fortunate. While it is Schütte's mission in life to inspire people to push the boundaries of the body’s capacity, she is equally passionate about using her talents to contribute to those less fortunate in her community. A competitive swimmer from a very young age, she resurrected her passion to swim the Ice Mile in June 2011, Speedo Africa Ice Swim, while at that time the idea of swimming an open water marathon has been on the cards for awhile, waiting for the opportune time and motivation. And that time came for her to do the 23km swim and the rest of her swims flowed from there.

‘ I learned a few hard lessons along the way especially on my 23km swim – such as always taking along enough food. This time I ran out, but luckily my stamina and mind pulled me through. The water conditions were rough with heavy swells part of the way and blue bottles just about everywhere – I have the sting marks all over my body including my face to prove it.’

‘I believe it is my duty to use my talents for good. I have been a swimming and water sports enthusiast as far back as I can remember, and firmly believe that swimming is the one sport that everyone can relate to, regardless of culture, age or nationality. The idea of an open water swimming marathon is exciting to many people, and I hope that that what I do inspires other young men and women to push their own boundaries, and to use their own talents to better the conditions of others.’

With her track record of good work such as educational work in the community and projects with various organization and her sheer perseverance, there was never any real doubt that this warm-hearted lass would make the final lap, on anything she sets her mind to.

Capetonian Cecilia Schutte, has raised the bar yet again. On Saturday 22 December this plucky young woman achieved two world records by completing a harrowing 33+ kilometers swim around Robben Island in 12 hours and 23 minutes, three times the distance around this renowned heritage site. She is the first female to now have swum around the island twice and the forst person to have swum around 3 times!

Lesser known is that she will literally cross the length and breadth of the ocean to help those in need and dedicates her life and all her swimming endeavors to raising funds and bettering the conditions of those less fortunate, especially young people. This swim was in aid of a young girl suffering from cancer.

Her more recent swim the record-breaking swim encircling Robben Island thrice (almost the distance of the English Channel) has never been undertaken before. She had to get through quite a bit to get ready for this swim. Due to a bike accident earlier this year which injured her arm, but thanks to Dr Bruce Harris-Westlake Chiropractic/Sports Injury center and the company, DNAnalysis which helped her get insight into the strengths and weaknesses in her body, she could get ready in time for the swim. She started her swim, also known as the Robben Island Circle of Life Swim, at the Oceana Boat Club near the V&A Waterfront at 7am on Saturday 22 December, with rough ocean conditions and heavy swell slowing her down considerably, and forcing her to swim further out to sea to evade being dumped onto the reef. The swim was done strictly in accordance with the rules of the Cape Long Distance Swimming Association, the only official body to officiate over solo swims in Cape Town waters in South Africa, and elsewhere in the country on request. Wearing only her Speedo bather, cap and goggles, and accompanied by her great support team, including Buff Van Westenbrugge, she swam her way into the record books.

'Nelson Mandela was already in jail for 16 years when I was born in 1978, and his leadership style, and humble approach as well as his vision and persistence in the face of extraordinary adversity left their mark on my heart,‚ enthuses this passionate community worker.

I want to honour him, our country‚s greatest leader, by raising money for our youth program, 'Splash' - an initiative where anyone can adopt‚ a child for R450 and enable them to learn about water safety and also how to swim. It‚s sad and unnecessary that South Africa has one of the highest incidences of drowning in the world. I have dedicated every action in my life and all my swimming endeavors to raising funds for socio-development projects and improving conditions, especially among our youth. I see it as my duty to use my swimming talent to assist and particularly to educate and enable young people in need.'

Always pushing herself beyond her limits, Cecilia's future plans are now focused on what she calls “the Robben island Circle of Life Swim”, a challenge that will see her completing a series of Extreme Ultra Swims over the next few months, each swim an icy 37.5 kilometers, in preparation for her greatest challenge yet, an Extreme Ultra Marathon swim, that will be done in hypothermic water conditions across a distance of 42 kilometers. As always, she will be the first person to attempt this momentous feat, and is already putting plans in place for early 2013.

We wish her well. After all, every victory lap for this courageous and generous young swimmer is also a triumph for the many young people in our communities that she plans to empower.