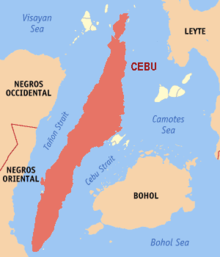 Cebu Island in the Philippines

Cebu Province is a province in the Philippines, consisting of Cebu Island and 167 surrounding islands. Its capital is Cebu City, the oldest city in the Philippines, which forms part of the Cebu Metropolitan Area together with four neighboring cities (which comprise Danao City, Lapu-Lapu City, Mandaue City and Talisay City) and eight other local government units. Mactan-Cebu International Airport, located in Mactan Island, is the second busiest airport in the Philippines.

Cebu is one of the most developed provinces in the Philippines, with Cebu City as the main center of commerce, trade, education and industry in the Visayas. Condé Nast Traveler Magazine named Cebu the 7th best island destination in the Indian Ocean-Asia region in 2007, 8th best Asian-Pacific island destination in 2005, 7th in 2004 and in 2009, with popular tourist destinations such as Mactan Island and Moalboal. In a decade it has transformed into a global hub for furniture making, tourism, business processing services, and heavy industry.

Cebu Island is the main island of Cebu Province at the center of the Visayan Islands, 365 miles (587 km) south of Manila. It is flanked on both sides by the Cebu Strait (between Cebu and Bohol) and Tañon Strait (between Cebu and Negros). Cebu Island is a long narrow island stretching 225 km (140 mi) from north to south, surrounded by 167 neighboring smaller islands, that includes Mactan, Bantayan, Malapascua, Olango and the Camotes Islands. The island is also known as the site of Ferdinand Magellan's death in the Battle of Mactan. Magellan had joined forces with Spanish soldiers and was leading them against Lapu-Lapu, a Visayan chieftain. There are memorials to both men on the island in Lapu-Lapu City.

On 11 April 2016, Ingemar Patiño Macarine swam 16.83 km across the Cebu Strait in 5 hours 49 minutes from LightHouse Brgy. Cabacungan on Cabilao Island, Municipality of Loon, Province of Bohol to Brgy. Bulasa, Municipality of Argao on Cebu Island. It is one of the World's Top 100 Island Swims.

Two men have crossed the Tañon Strait between the islands of Negros and Cebu in the Philippines: