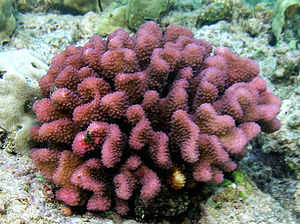 Cauliflower coral (Pocillopora meandrina) is a species of coral occurring in the East Pacific and the Indo-West Pacific. This coral lives in shallow reef environments.

The colonies of Pocillopora meandrina can be fairly solid and dome-shaped or branching with areas that are either flattened and ridge-like or fine and convoluted. The colonies are covered by wart-like growths called verrucae. The colour ranges from brown to pink and the polyps with their extended tentacles are usually visible only at night.

Pocillopora meandrina occurs in the Indian and Pacific Oceans and is found across a range of habitats that include exposed reefs, protected lagoons and lower reef slopes.

P. meandrina is a hermaphrodite and each polyp contains four sets of male and four sets of female gonads. The larvae develop inside the body of the polyp and are not expelled into the water until they are mature. They remain free swimming for a number of weeks before settling and starting to build a hard matrix. The polyps can also reproduce asexually by fragmentation.