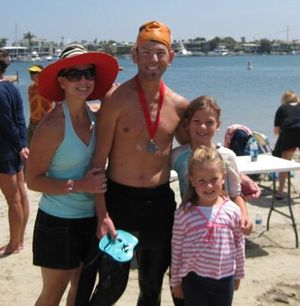 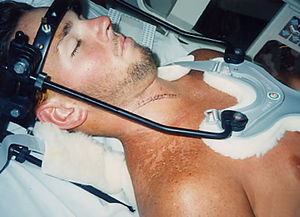 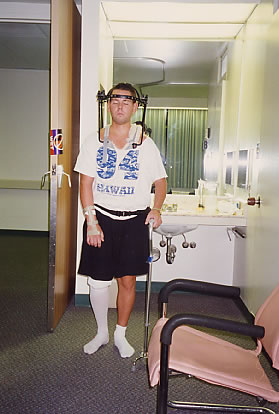 Casey Kammel, dedicated to his intense therapy for recovery 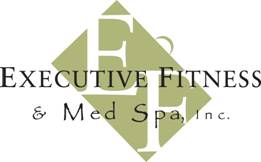 Casey Kammel is the owner of Executive Fitness and Med Spa

‎Casey Kammel (born November 5) is triathlete from Long Beach, California paralyzed on his right side. He is the owner of Executive Fitness and Med Spa, a Private Training Studio in Naples Island along with his wife Lisa Kammel. He values a healthy lifestyle - swimming, biking, working out, and/or running daily. He is the father of two daughters - Olivia and Cooper Kammel.

He was a competitive body builder in his 20's and collegiate baseball player.

On August 20th, 1994, a relaxing Hawaiian vacation ended suddenly when Casey Kammel hit his head on the bottom of a swimming pool and broke his neck. He sank motionless. Having crushed his C4 vertebrae, Kammel was immediately paralyzed from the neck down and was flown via helicopter to a trauma center on Oahu, a flight that would begin the journey of a lifetime.

Kammel endured extensive surgery to repair the damaged vertebrae, only to have the doctors tell him that he would never walk again. The words were devastating, but he refused to accept their prognosis. After spending three weeks in the hospital in Hawaii and another 26 days in Long Beach Memorial Hospital, Kammel was back in the gym. Still wearing a steel halo brace and confined to a wheelchair, he began training his clients and working out with as many machines as he could.

Today, he is no longer in a wheelchair. His recovery has been beyond incredible. With dedication, hard work and intense therapy, Kammel proved the doctors wrong. Maintaining a busy schedule and exercising daily, he currently enjoys a healthy and active lifestyle. Utilizing the experiences he gained from his tragedy enables him to motivate his clients from within. He has turned his personal tragedy into triumph and has fulfilled his dream of creating Executive Fitness, A Private Training Studio.