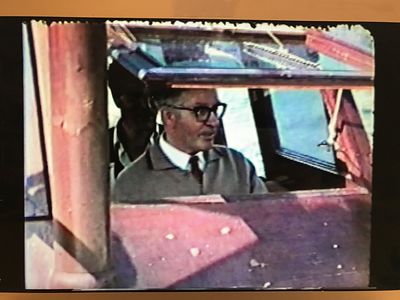 Leonard Hutchinson at the helm - notice the tie!

Captain Leonard Hutchinson from Great Britain, was inducted as an Honour Pilot in the International Marathon Swimming Hall of Fame in 2004.

Captain Hutchinson was one of the best English Channel pilots and is remembered for his skill as a navigator and his kind and considerate manner, no matter how long the crossing took. Always in a boat and tie on board, he piloted more than 100 English Channel swims for swimmers from over the world, including Brazil, Pakistan, Southern Rhodesia (now Zimbabwe), Iceland, Argentina, Mexico, Spain and Belgium, over 60 of which are chronicled in his diaries.