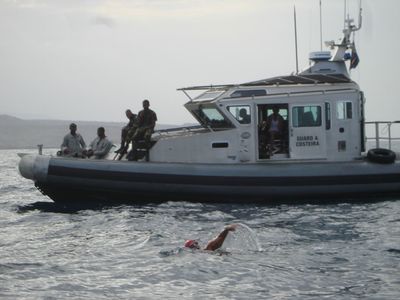 Cape Verde (Portuguese: Cabo Verde), officially the Republic of Cape Verde, is an island country, spanning an archipelago of 10 islands located in the central Atlantic Ocean, 570 kilometres off the coast of Western Africa. The islands, covering a combined area of slightly over 4,000 square kilometres (1,500 sq mi), are of volcanic origin and while three of them (Sal, Boa Vista and Maio) are fairly flat, sandy and dry, the remaining ones are generally rockier and have more vegetation. However, because of the infrequent occurrence of rainfall the overall landscape is not particularly green.

The name of the country stems from the nearby Cap Vert, on the Senegalese coast, which in its turn was originally named "Cabo Verde" when it was sighted by Portuguese explorers in 1444, a few years before the islands were discovered (verde is Portuguese for "green").

The previously uninhabited islands were discovered and colonized by the Portuguese in the 15th Century, and became important in the Atlantic slave trade for their location. The islands' prosperity often attracted privateers and pirates, including Sir Francis Drake, a corsair (privateer) under the authority of the British crown, who twice sacked the (then) capital Ribeira Grande, in the 1580s. The islands were also visited by Charles Darwin's expedition in 1832. The decline in the slave trade in the 19th century resulted in an economic crisis for the islands. With few natural resources, and without strong sustainable investment from the Portuguese, the citizens grew increasingly discontent with the colonial masters, who nevertheless refused to provide the local authorities with more autonomy. This discontent festered and culminated in 1975, when a movement originally led by Amílcar Cabral (who was assassinated on 20 January 1973) then passed onto his half-brother Luís Cabral, achieved independence for the archipelago.

Cape Verde is a horseshoe-shaped cluster of ten islands (nine inhabited) and eight islets. The islands are spatially divided into two groups:


The largest island, both in size and population, is Santiago, which hosts the nation's capital, Praia, the principal agglomeration in the archipelago.

Canal de São Vicente was first crossed by an American swimmer David Yudovin on 26 June 2012 and between Brava on 8 July 2012. Yudovin also crossed between Maio and Santiago on 30 June 2013. Cape Verde is also the starting point of Jennifer Figge's cross-Atlantic continuous stage swims.