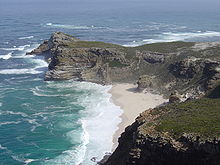 Cape of Good Hope or the Cape of Storms

The Cape of Good Hope is a rocky headland on the Atlantic coast of the Cape Peninsula, South Africa.

When following the western side of the African coastline from the equator, the Cape of Good Hope marks the point where a ship begins to travel more eastward than southward. Thus, the first modern rounding of the cape in 1488 by Portuguese explorer Bartolomeu Dias was a milestone in the attempts by the Portuguese to establish direct trade relations with the Far East.

Dias called the cape Cabo das Tormentas. "Cape of Storms" was the original name of the Cape of Good Hope.

As one of the great capes of the South Atlantic Ocean, the Cape of Good Hope has been of special significance to sailors for many years and is widely referred to by them simply as the Cape. It is a waypoint on the clipper route followed by clipper ships to the Far East and Australia, and still followed by several offshore yacht races.