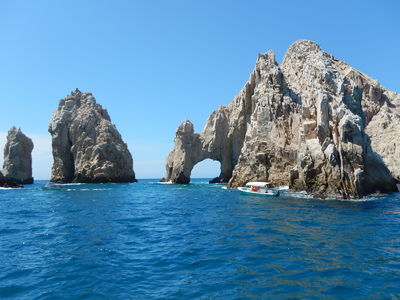 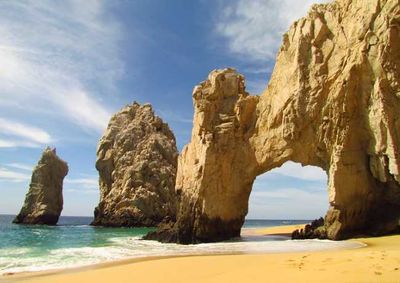 Cabo has been rated as one of Mexico's top 5 tourist destinations; it is known for its beaches, scuba diving locations, balnearios, the sea arch El Arco de Cabo San Lucas, and marine life. The Los Cabos Corridor has become a heavily trafficked holiday destination for tourists, with numerous resorts and timeshares along the coast between Cabo San Lucas and San José Del Cabo.

Cabo houses a range of wild life including rays, sharks, birds like eagles and a range of fish like mahi-mahi (dorada) and stripe marlin.

The arch is locally known as El Arco where the Pacific Ocean meets the Sea of Cortez. This area is widely used in hotel advertisements in the Los Cabos Corridor. This spot is a popular gathering area for sea lions. This location is a great tourist attraction. It is three stories tall and was formed over massive erosion.

The rugged taffy-colored El Arco (The Arch) rock formation erupts from the sea at the tip of the Baja Peninsula. Also known as Land's End, El Arco is a popular tourist attraction and the central focus of countless vacation photos. Viewed from a distance from nearly every vantage point in Cabo San Lucas, the image of El Arco is synonymous with Cabo San Lucas. By the way, it’s called Land’s End because, as the crow flies, if you followed a line south from here, you would not touch land again until you reached the South Pole.

Visit by boat taxi (some with glass bottoms) from the Cabo San Lucas Marina. View the iconic golden arches from the boat or ask the captain to drop you off and arrange a pick-up time. En route you’ll pass lazy sea lions basking on the rocks.

While the Baja Peninsula today is a major migration route for whales, Cabo San Lucas was once an important trade route for Spanish galleons in the 1500s. Pirates would hide behind the protection of El Arco in the calm bay of the Sea of Cortez as they waited for Spanish fleets loaded with gold, spices and other treasures to pass. At the appropriate time they would launch their attack from the towering rock formation of El Arco.