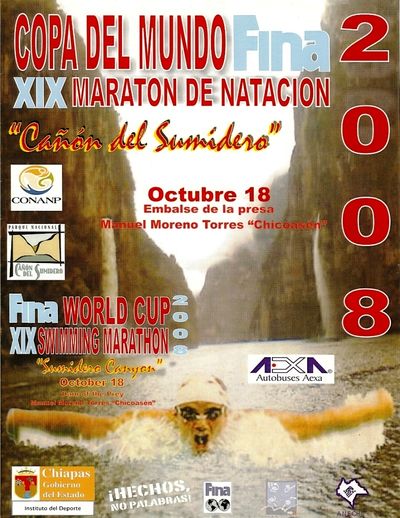 Above: Official poster for the 2008 Race

Sumidero Canyon (Spanish: Cañón del Sumidero) is a narrow and deep canyon surrounded by a national park located just north of the city of Chiapa de Corzo in the Mexican state of Chiapas. The canyon’s creation began around the same time as the Grand Canyon in the U.S. state of Arizona, by a crack in the area’s crust and erosion by the Grijalva River, which still runs through it. The canyon has vertical walls which reach as high as 1000 meters, with the river turning up to ninety degrees during the thirteen kilometers that the narrow passage runs. At the north end of the canyon is the Chicoasén Dam, one of several on the Grijalva River and important for water storage and the generation of hydroelectricity. Surrounding the canyon is the Sumidero Canyon National Park, which extends for 21,789 hectares over four municipalities of the state of Chiapas. This park is administered by the Comisión Nacional de Áreas Naturales Protegidas (Conanp). Most of the vegetation of this park is low to medium height deciduous rainforest, with small areas of pine/oak trees and grassland.

The canyon/park is the second most important tourist site in Chiapas, drawing mostly Mexican visitors who see the canyon by boats which leave from Chiapa de Corzo. The park borders Tuxtla Gutiérrez, the state’s largest city, which has caused problems with human encroachment and settlement on park land. More importantly, the urban areas and logging areas upstream from the canyon have caused serious pollution problems, with up to 5000 tons of solid waste extracted from the Grijalva River each year. This waste tend to build up in the canyon because of its narrowness, the convergence of water flows and the presence of the Chicoasén Dam.