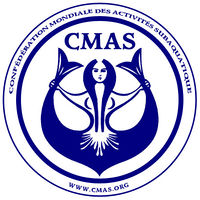 Confédération Mondiale des Activités Subaquatiques (CMAS) is an international federation that represents underwater activities in underwater sport and underwater sciences, and oversees an international system of recreational snorkel and scuba diver training and recognition. It is also known by its English name, the World Underwater Federation, and its Spanish name, Confederacion Mundial De Actividades Subacuaticas. Its foundation in Monaco during January 1959 makes it one of the world's oldest underwater diving organisations.

CMAS consists of 3 major committees - Sport, Technical and Scientific. These committees are overseen by a Board of Directors elected periodically at the annually convened General Assembly. The BoD, the Sport Committee and the Scientific Committee oversee sub-committees known as commissions. Day-to-day operation is overseen by a steering committee appointed from the BoD. Its headquarters is currently located in Rome.