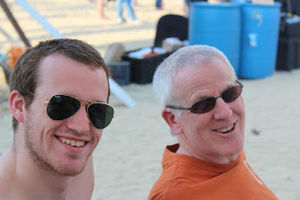 Gemmell is the Head Coach at Georgetown Prep for the Nation's Capital Swim Team and has more than 20 years of club coaching experience. He has 40+ combined years of competitive swimming experience as a swimmer and coach. A Delaware native and a graduate of the University of Michigan, he competed in multiple NCAA Division 1 Nationals, USA Swimming Senior Nationals and qualified for both the 1980 and 1984 USA Olympic Swimming Trials.

His coaching experience includes Age Group, High School, Collegiate and USA Swimming Senior National Level swimmers. He has worked, swum and coached with or alongside Olympic Coaches, Olympians, National Champions and Top 16 Swimmers throughout the years. He is a four-time member of USA Swimming's National Team Coaching Staff. He was also a member of the 2010 Junior Pan Pacific Swimming Championships coaching staff. He has placed swimmers on USA Swimming’s National “A” Team for four consecutive years and USA Swimming's Junior/Youth (A) Team five times. He placed two swimmers on the 2009-10 USA Swimming National Team, one swimmer on both the 2009 & 2011 World Championship Team and 2010 Pan Pac Team.