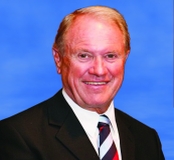 Bruce George Baird, AM (born 28 February 1942), is a former Australian politician and an avid open water swimmer who is on the Advisory Board of iSwimtoo.

He was Assistant Trade Commissioner at the Australian Embassy in Bonn, Germany, 1972–76 and Trade Commissioner at Australian Consulate-General in New York 1977-80. He was Government Affairs Manager for Esso Australia 1980-84. Baird was a member for the electorate of Northcott in the New South Wales Legislative Assembly 1984-95. He was Minister for Transport 1988-95, Minister for Sydney's Olympic Bid 1990-93 and Minister for Tourism and Roads 1993-95. He was also deputy leader of the Liberal Party from 1992 to 1994.

Baird was a Liberal member of the Australian House of Representatives from October 1998 to November 2007, representing the electorate of Cook, New South Wales. He also held the positions of chairman of the National Rail Corporation, and was a board member of ABN Amro Hoare Govett, Tourism Training Australia and Tourism Education Services. Baird along with fellow Liberal MPs Petro Georgiou, Russell Broadbent and Judith Moylan opposed mandatory detention of asylum seekers.

Baird was appointed Chairman of the Tourism and Transport Forum, a peak industry lobby group, in 2008. In the same year, he was also appointed as chair of the Refugee Resettlement Advisory Council, which advises the Australian government on resettling refugees in Australia. In 2010 on Australia Day, he was appointed a Member of the Order of Australia for service to the Parliament of Australia, and to the community of New South Wales through a range of business, tourism and welfare organisations.