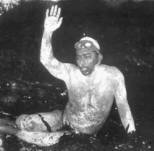 Brojen Das (Bengali: ব্রজেন দাস Brojen Daːsh) (9 December 1927 – 1 June, 1998) was inducted in the International Marathon Swimming Hall of Fame in 1965 as an Honour Swimmer. He was the first Asian to swim across the English Channel when he succeeded in 1958. He crossed the English Channel a total of six times to become King of the Channel® from 1960 to 1974, setting four records in the process. He also held the record for the fastest crossing for three years and swam in the Maratona del Golfo Capri-Napoli. He met Her Majesty Queen Elizabeth the Queen Mother, after his last channel crossing in 1961 and American President Lyndon Johnson in 1964 during his visit to America.

Das was born in the Kuchiamora village of Bikrampur, Munshiganj District in Bangladesh (then part of British India). After his primary education in his native village, he passed matriculation in 1946 from the KL Jubilee High School, Dhaka and received his Intermediate and Bachelor of Arts from Vidyasagar College, Kolkata.