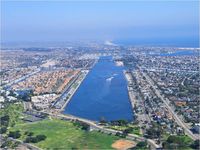 Right in the heart of Southern California

Live webcast of Swim Across America

Brian Icenhower is an American pool and open water swimmer who was one of the top swimmers in the 10 km race at the Swim Across America Long Beach event held in Long Beach, California on 23 September 2012.

Swim Across America Long Beach is a multi-race charity event with 100m, 800m, 1.5 km, 5 km and 10 km swims held in Marine Stadium, Long Beach, California in September. It is held in conjunction with the annual Global Open Water Swimming Conference and the International Marathon Swimming Hall of Fame induction ceremonies.

It is also a fund-raiser for cancer research conducted at MemorialCare Hospital's Todd Cancer Institute in Long Beach.