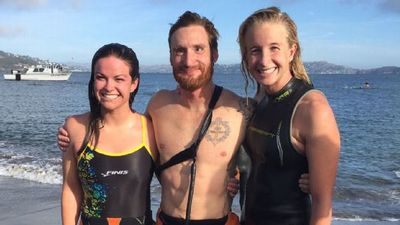 Brad Snyder is a 32-year-old American competitive swimmer and open water swimmer and triathlete. A former captain of the Naval Academy's swim team and Navy officer, he won five gold medals and two silver medals at the 2012 and 2016 Paralympics after he lost his eyesight in a roadside bombing in Afghanistan on 7 September 2011.

He swam from Alcatraz Island to the San Francisco shoreline in October 2016 with guide swimmers Jill Dahle and Bryn Lewis in the 2016 Alcatraz Swim for Sight that benefits the support foundation of the University of California San Francisco Ophthalmology Department.

He won two gold and one silver medal at the 2012 London Paralympic Games.

He won three gold medals and one silver medal at the 2016 Rio Paralympic Games while setting a 30-year-old record in the 100m freestyle in his visually impaired class.