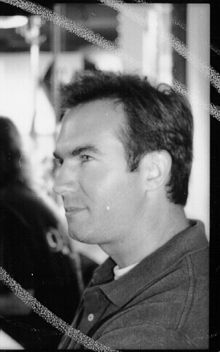 Brad Hall (born Douglas Bradford Hall on 16 May 1968) is a triathlon coach and serves as the crew chief of Natalie Radtke's attempt across the Catalina Channel on 10 August 2016.

Hall is an American film producer and entrepreneur, best known as the founder and owner of the entertainment industry website EntertainmentCareers.net and board member of Reading to Kids.

Hall was a producer on the film The Sky Is Falling in 2000 and three short films between 1993 and 1994. His short The Traveling Poet appeared on Late Night with David Letterman in 1993, as did his short Poolside Ecstasy and Housewives: The Making of the Cast Album. The shorts featured and were directed by four-time Emmy Award winner Chris Elliott. Hall was also a production assistant on several feature films in the 1990s and assistant director on the television show Sports Theater with Shaquille O'Neal in 1998.

In 2000 he founded EntertainmentCareers.net, which connects job seekers to major movie and music companies. Since then Hall has been interviewed regarding small business, internet business issues including marketing and customer service and has served on panel discussions on careers and the entertainment industry.