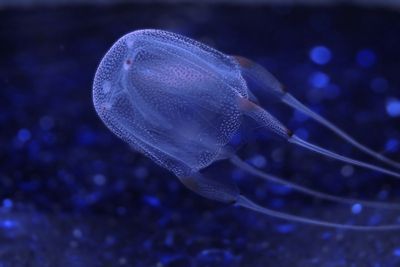 A box jellyfish and its tentacles that have been researched and studied by Dr. Angel Yanagihara 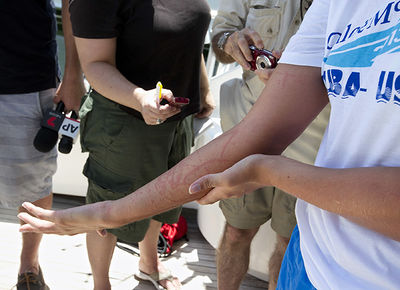 noun - Box jellyfish (class Cubozoa) are cnidarian invertebrates distinguished by their cube-shaped medusae. Box jellyfish, also known as Stingers, are known for the extremely potent venom in their tentacles produced by some species. Chironex fleckeri, Carukia barnesi and Malo kingi are among the most venomous creatures in the world. Stings from these and a few other species in the class are extremely painful and sometimes fatal to humans.

Box jellyfish or sea wasp is also a common name for the notoriously dangerous Chironex fleckeri. The ambiguous but commonly used terms "sea wasp" and "Marine stinger" are sometimes used to refer to the more venomous species of box jellyfish.

Box jellyfish most visibly differ from the "true" or Scyphozoan jellyfish in that they are umbrella shaped, rather than domed or crown-shaped. The underside of the umbrella includes a flap, or velarium, concentrating and increasing the flow of water expelled from the umbrella. As a result, box jellyfish can move more rapidly than other jellyfish. In fact, speeds of up to six meters per minute have been recorded.

The Box jellyfish's nervous system is also more developed than that of many other jellyfish. Notably, they possess a nerve ring around the base of the umbrella that coordinates their pulsing movements; a feature found elsewhere only in the crown jellyfish. Whereas some other jellyfish do have simple pigment-cup ocelli, box jellyfish are unique in the possession of true eyes, complete with retinas, corneas and lenses. Their eyes are located on each of the four sides of their bell in clusters. These enable them to see specific points of light, as opposed to simply distinguishing between light and the dark. Box jellies also retain the lesser type of eye, because the strong eyes are only one of four subsets. They therefore have 24 eyes.

The box jellyfish has been called "the world's most venomous creature," though only a few species in the class have been confirmed to be involved in human deaths and some species pose no serious threat. For example, the sting of Chiropsella bart only results in short-lived itching and mild pain.

Each tentacle has about 500,000 cnidocytes, containing nematocysts, a harpoon-shaped microscopic mechanism that injects venom into the victim. There are many different kinds of nematocysts found in cubozoans. In Australia, the fatal envenomations are most often perpetrated by the largest species of this family of jellyfish Chironex fleckeri, owing to the high potency of the venom carried in their nematocysts. The recently discovered and very similar Chironex yamaguchii may be equally dangerous, as it has been implicated in several deaths in Japan. It is unclear hence which of these species is the one usually involved in fatalities in the Malay Archipelago. In 1990, a 4-year-old child died after being stung by Chiropsalmus quadrumanus at Galveston Island in the Gulf of Mexico, and either this species or Chiropsoides buitendijki are considered the likely perpetrators of two deaths in West Malaysia. At least two deaths in Australia have been attributed to the thumbnail-sized Irukandji jellyfish. Those who fall victim to these may suffer severe physical and psychological symptoms known as Irukandji syndrome. Nevertheless, most victims do survive, and out of 62 people treated for Irukandji envenomation in Australia in 1996, almost half could be discharged home with few or no symptoms after 6 hours, and only two remained hospitalized approximately a day after they were stung.

In Australia, Chironex fleckeri has caused at least 64 deaths since the first report in 1883, but even in this species most encounters appear to only result in mild envenoming. Most recent deaths in Australia have been in children, which is linked to their smaller body mass. In April 2010, a 10-year-old Australian girl survived multiple stings from box jellyfish and her survival is considered a medical miracle. In parts of the Malay Archipelago, the number of lethal cases is far higher (in the Philippines alone, an estimated 20-40 die annually from Chirodropid stings), likely due to limited access to medical facilities and antivenom, and the fact that many Australian beaches are enclosed in nets and have vinegar placed in prominent positions allowing for rapid first aid. Vinegar is also used as treatment by locals in the Philippines.

The box jellyfish actively hunts its prey (zooplankton and small fish), rather than drifting as do true jellyfish. It is capable of achieving speeds of up to 4 knots (1.8 m/s).

Box jellyfish are known as the "suckerpunch" of the sea not only because their sting is rarely detected until the venom is injected, but also because they are almost transparent.

The venom of cubozoans is distinct from that of scyphozoans, and is used to catch prey (fish and small invertebrates, including shrimp and bait fish) and for defense from predators, which include the butterfish, batfish, rabbitfish, crabs (Blue Swimmer Crab) and various species of sea turtles (hawksbill turtle, flatback turtle). Sea turtles, however, are apparently unaffected by the sting and eat box jellies.

In Hawaii, box jellyfish numbers peak approximately 7 to 10 days after a full moon, when they come near the shore to spawn. Sometimes the influx is so severe that lifeguards have closed infested beaches, such as Hanauma Bay, until the numbers subside.

As of 2007, at least 36 species of box jellyfish were known. These are grouped into two orders and seven families. A few new species have been described since then, and it is likely undescribed species remain.

Its microscopic stinging cells are present at up to 5,000 per centimeter of tentacle length. Once a tentacle of the box jellyfish adheres to skin, it pumps nematocysts with venom into the skin, causing the sting and agonizing pain. Successful use of Chironex antivenom by members of the Queensland Ambulance Transport Brigade showed that Acetic acid, found in vinegar, disables the box jelly's nematocysts that have not yet discharged into the bloodstream (though it will not alleviate the pain). Common practice is to apply generous amounts of vinegar prior to and after the stinging tentacle is removed. Removal of additional tentacles is usually done with a towel or gloved hand, to prevent secondary stinging. Tentacles will still sting if separated from the bell, or after the creature is dead. Removal of tentacles without prior application of vinegar may cause unfired nematocysts to come into contact with the skin and fire, resulting in a greater degree of envenomation.

Although commonly recommended in folklore and even some papers on sting treatment, there is no scientific evidence that urine, ammonia, meat tenderizer, sodium bicarbonate, boric acid, lemon juice, fresh water, steroid cream, alcohol, cold packs, papaya, or hydrogen peroxide will disable further stinging, and these substances may even hasten the release of venom. Pressure immobilization bandages, methylated spirits, or vodka should never be used for jelly stings. In severe Chironex fleckeri stings cardiac arrest can occur quickly, so cardiopulmonary resuscitation (CPR) can be life saving and takes priority over all other treatment options.