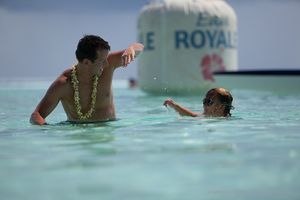 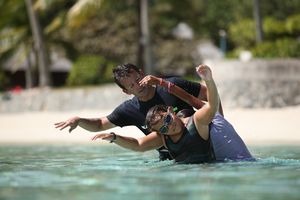 Bora Bora Liquid Festival, the brainchild of Stefan Lambert, is a 7-day celebration of sports and ocean-based endurance events taking place on Bora Bora, Polynesia’s most beautiful island atoll for the 11th consecutive year. The 2011 race is held on December 12-18 at the Sofitel Bora Bora Marara Beach and Private Island.

The event has grown since 2000 into an open water celebration of sporting excellence and Tahitian culture. 2010 marked the introduction of the Bora Bora 5 km swim, which is fast becoming one of the festival’s highlights given the recent global explosion of open water swimming.

In a unique effort to make the 5k race unpredictable and challenging every year, Lambert has insisted on changing the course each time the event is held, thereby leveling the playing field and discouraging returning swimmers from having a strategic advantage. In addition, each year the race distance will increase by 1k (making 2011’s event officially 6k).

"This is one of the most unique and exciting events I’ve ever been a part of," says last year’s 5k winner and open water swimmer Alex Kostich. "While the event is a great racing experience in and of itself, what I love about the Liquid Festival is the celebratory nature of the gathering; its produced by and populated by people who grew up around and have a deep affinity for the ocean. While the events are all highly competitive and incredibly exciting, there’s an undercurrent of passion that infuses the whole week which you don’t necessarily see anywhere else. It’s a stunning location of course, but more importantly its a celebration of all things aquatic-and to my knowledge that’s never been done before."

Sprinting off-shore into the crystalline turquoise waters of Bora Bora’s picturesque lagoon, swimmers may encounter schools of stingrays and stunning coral formations, perhaps looping through the island’s world famous over-water bungalows and tiny atolls. Upon completion, race participants are encouraged to stay for the duration of the festival and partake in the other sports while enjoying the event’s wall-to-wall roster of festive barbecues, adventure tours, live performances or relaxing days at the beach.

In addition to the 5 km ocean swim and open water swimming / stroke technique clinics before and after the race, the Liquid Festival will include a 55 km surfski division, a waterman triathlon, stand up paddle (SUP), Va’a canoeing and relay events.