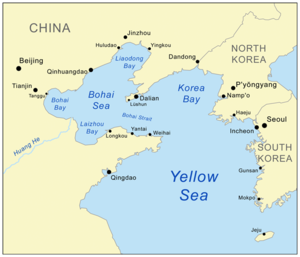 Bohai Gulf (or Bohai Sea, 渤海, Bohai, Bo Hai), is the innermost gulf of the Yellow Sea on the coast of Northeastern and North China. It is approximately 78,000 km2 (30,116 sq. mi) in area and its proximity to Beijing, the capital of the Peoples Republic of China, makes it one of the busiest seaways in the world.

Until the early 20th century, Bo Hai was often called the Gulf of Chihli (直隸海灣) or the Gulf of Pechihli (北直隸海灣).

The Bohai Gulf is bounded by the Liaodong and Shandong Peninsulas. It has become one of busiest sea routes in recent times. There are three major bays inside the Bohai Sea: Laizhou Bay to the south, Liaodong Bay to the north, and Bohai Bay to the west.

Bohai Bay (or 渤海湾, 渤海灣) is one of the three bays forming the Bohai Gulf. It borders Hebei province and Tianjin Municipality. The three bays are Laizhou Bay to the south, Liaodong Bay to the north, and Bohai Bay to the west. It is the most southerly sea in the northern hemisphere in which sea ice can form.