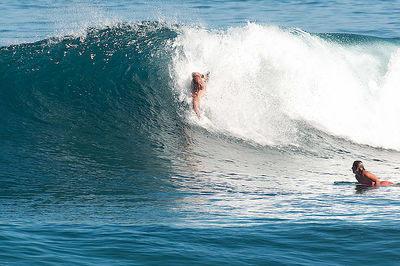 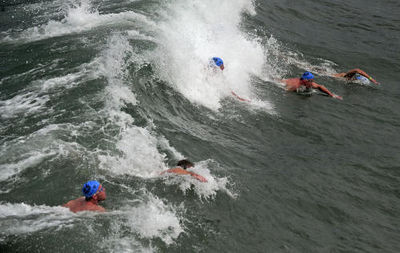 noun - A body surfer is an individual who does body surfing or the art and sport of riding a wave without the assistance of any buoyant device such as a surfboard or bodyboard. Bodysurfers typically equip themselves only with a pair of fins that stay on during turbulent conditions and optimize propulsion, but it can also be done without fins. Bodysurfing can be done by most anyone that can swim and can be an essential skill for competitive open water swimmers who compete in open bodies of water where there are waves. It is also an essential skill for open water swimmers and triathletes for open water swims held along the coast where there are waves and is one element of the concept of interleaving in the training of open water swimmers and triathletes.

To get on the wave, a body surfer must time their launch, pick a direction, kick and stroke hard with feet and arms, then use their back and outstretched arm, to ride the wave both sideways and downward. Turns can be performed by digging the shoulder into the wave, causing the person to slide to the side of the wave and accelerate. Exiting the wave is key to safety, In shallow water the safest maneuver is roll sideways out of the wave letting the feet tumble forwards. In stronger waves a person must drop the head and execute a very rapid tumble forward to exit the wave, flipping the feet over as fast as possible. This must be done with no hesitation, to avoid injury. Advanced techniques include spins and barrel rolls.

Another variation is using the underwater takeoff and ride technique known as "Dolphin Pop" or "Porpoising". Unlike standard body surfing, which involves the surfer sliding with gravity down the face of the wave, porpoising utilizes the same wave energy as a dolphin or seal uses when they ride 'inside' of the wave; within the wave's energy pulse. In order to achieve this technique, the exponent starts out a meter or two further out to sea than one would for a 'standard' body surf technique. As the wave passes, one dives into the 'back' of the wave and gives a quick kick (with fins) or single crawl-stroke, and then tucks the body into a 'dolphin shape' by tucking the chin to the chest, hunching the shoulders, bringing the hands into the inner thighs, stiffening the whole body, and creating a concave 'air bubble' in the chest. By flexing forward or back from the hips, one can control the depth of the body within the wave - too deep and one crashes into the sand (which could be painful and even dangerous) - too high in the wave and one 'pops' out the top. Once 'grabbed' by the wave's energy, to minimize drag and turbulence; the body must be held rigid and still, without kicking or attempts to use the arms - or the hydrodynamic forces that make the technique possible will break down and the wave 'lost'. Done correctly, the wave energy then takes over and pulls the surfer along at an ever accelerating rate - allowing the exponent who has experience to either literally fly out through the face of the wave (and somersault back underneath the wave) or come up in front of the white water and ride to the beach.

One of the most famous bodysurfing spots in the world is The Wedge, located in Newport Beach, California. Wave faces there can reach upwards of 30 ft and more on big southern hemisphere and hurricane-generated swells during the spring, summer, and fall. Known mainly for high performance bodysurfing and intense jaw dropping rides and wipeouts, these waves are created by swells hitting the jetty and "rebounding" into oncoming waves, creating the "wedge effect," which results in peaks that can "jack up" to incredible sizes and shapes. When it is "on," The Wedge is for experienced riders only. The Wedge is to bodysurfing what the Pipeline is to surfing: the best bodysurfers prove themselves at The Wedge, as do the best stand-up surfers at Pipeline.(Pipeline is also a fantastic bodysurfing wave, and the first contest at Pipeline was the Pipeline Bodysurfing Classic - see below)

Annually, the Pipeline Bodysurfing Classic competition runs at the world-famous Banzai Pipeline. This event is considered[by whom?] to be a world-class pro-am competition, and yet is also considered one of the truly unique[citation needed] underground surf contests around. Among the bodysurfing population at large, the event is considered the premier event internationally. It is one of the only times bodysurfers have access to the cream of the Pipeline's waves.

The World Bodysurfing Championships along with the Pipeline Bodysurfing Classic are the two biggest bodysurfing competitions in the world according to the Encyclopedia of Surfing. It started in 1977, and runs every August in Oceanside, California. Another long-time contest is the Manhattan Beach Bodysurfing Contest as a part of the International Surf Festival held in Manhattan Beach, California. This contest is sponsored by the oldest bodysurfing club in The United States, Gillis Beach Bodysurfing Association. Dating back to 1964, the GBBA formed on the beaches of Playa Del Rey in Los Angeles. Members of GBBA run the bodysurfing contest, but do not participate in the interest of promoting the sport. The contest is a part of the International Surf Festival held late July or the first of August annually. The surf festival is known for its volleyball, lifeguard competition and the bodysurfing contests.

Also in Mexico, between April and June in Ixtapa-Zihuatanejo, at Las Escolleras beach, takes place the tournament called Torneo Internacional de Bodysurf Las Escolleras, where the competitors challenge the powerful pipes in this famous waves of world-class, with the notoriety that this two-day event is not charged subscription to the competition, but it rewards the first four places of the category, with trophies and gifts from sponsors and make a big party with live music at the beach as the pure style of Sharing The Aloha Spirit.[citation needed]

In addition to the contests above there are numerous other contests in California and Hawaii. Many clubs and contests can be found in France, Brazil, Australia. Both France and Brazil have a series of contests to determine a national champion. In the UK, an annual Bodysurfing competition takes place at Trevaunance Cove, St. Agnes. This open contest is extremely competitive at all ages and requires competitors to enter without wetsuits, fins or any other aids.

Bodysurfing can be an essential skill for competitive open water swimmers and triathletes who participate in swims and triathletes in locations were there is surfbreak and waves. Experienced athletes can identify swells as they swim into shore and catch waves to move significantly faster through the water than simply swimming. This skill to catch a wave at the end of an open water swim or triathlon swim leg enables these experienced practitioners to beat their less experienced competitors.

In Hawai’i body surfing is called He’e umauma (sliding with the chest) while surfing with a board is called he’e nalu (literally, wave sliding). In Australia, body surfing is also known as 'body bashing'. Body bashing is colloquial for the rough and tumble of the experience of being dumped by ill chosen waves.