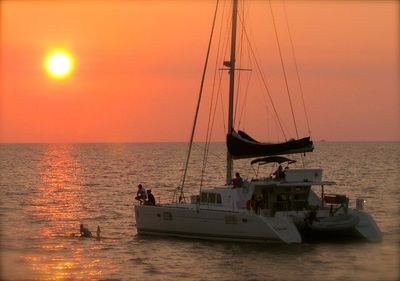 Sunluver under the direction of Captain Bob and Captain Mitch Olin

He owns and operates Sunluver Charters and holds a USCG 50 ton Master Captains License with a Sailing Endorsement and has been a resident of Key West for over 6 years. He shares mariner duties on the Sunluver with his son Captain Mitch Olin.

Built in 2006, Sunluver is a Lagoon 440 with the Owners Suite layout that offers guests a comfortable, enjoyable, and restful stay. Beautifully appointed rooms and countless amenities make Sunluver one of Key West's most desired private yachting experience. The catamaran by design has a more roomy interior and offers a smooth sailing experience without the "heeling" motion of a monohull that often causes sea sickness.