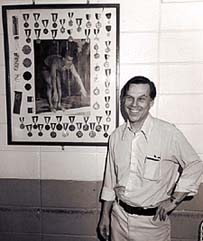 Bob Mattson was an All–American swimmer at North Carolina State and a world record holder in college. He coached every Delaware swimmer to make U.S. Olympic swimming teams and nearly two dozen swimmers who competed in Olympic trials. As swimming coach and founder of the Wilmington Aquatic Club, coach Mattson put Delaware on the national and international swimming map. During his Delaware coaching career that spanned five decades, Mattson coached hundreds of swimmers who excelled in college and high school competition, including numerous All–American selections. Jenny Franks set a world record that stood for more than five years and Maryde Mackie Hand was a four–time All–American and an Olympic Trials participant. He continues to be recognized around the globe as a pioneer in training methods, ideas on stroke mechanics and sports psychology.