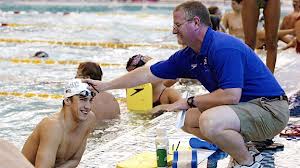 Bob Bowman is an American pool and open water swimming coach best known as the coach of record-breaking American swimmer Michael Phelps. From 2005-2008, he was the head coach for the University of Michigan men's swimming & diving team, replacing Jon Urbanchek, as well as the head coach for the club team based at the school: Club Wolverine. He was the eighth men's head coach in the history of the University of Michigan Swimming program. As of September 2008, he is the CEO/Head Coach for North Baltimore Aquatic Club.

In 1986-87, Bowman was a coach at the Area Tallahassee Aquatic Club and also served as an assistant coach at his alma mater Florida State University. Bowman swam for the Seminoles from 1983–85, serving as a team captain in his final year. Bowman graduated from Florida State with a bachelor of science degree in developmental psychology and a minor in music composition in 1987.

Bowman held assistant coaching positions with the Napa Valley swim team (1991–92), the Cincinnati Pepsi Marlins (1990–91) and the Las Vegas Gold swim team (1988–90). Bowman was also the head coach and program director for the Birmingham Swim League from 1992-94. While with the Birmingham Swim League, he was responsible for program design, staff development and daily operation of a 250-member club. From 1994-96, Bowman served as head coach for the Napa Valley Swim Team. Bowman coached for nine years (1996–2004) at the North Baltimore Aquatic Club (NBAC) in Baltimore, Maryland. From 1996-1999 he held the position of senior coach; and from 1999-2004 he was NBAC's High Performance Coach. During his tenure in Baltimore, Bowman helped to produce 3 individual national champions, 10 national finalists and 5 USA National Team members. In recognition of his accomplishments, Bowman was named the USA's Coach of the Year in 2001 and 2003. He was also named Developmental Coach of the Year in 2002. It was also during his work at NBAC that Bowman began coaching Olympic gold medalist Michael Phelps.

Bowman was named as an assistant coach on the 2004 U.S. Olympic Team, serving as the primary coach for Phelps. At the 2004 Games, Bowman helped coach Phelps to eight medals, including six gold medals and two bronze. Four years later, at the 2008 Beijing Olympics, he coached Phelps to achieve eight Olympic gold medals, which had never been done before in a single Olympics. Bowman was an assistant coach at the 2012 London Olympics.