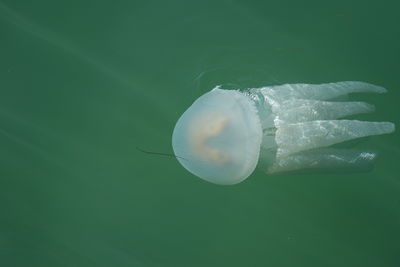 Blue blubber that stung the open water swimmers during the 2007 World Swimming Championships in St Kilda Beach in Melbourne, Australia

noun - Blue Jelly (Catostylus mosaicus) is a species of jellyfish in the Rhizostomeae order. It is characterized by a lack of tentacles at the margin of the jellyfish's body. Instead, it has about 8 oral arms. These oral arms become fused with the body of the jellyfish near the centre of its body. What is fascinating about the oral arms of the blue blubber is that they have minute mouths at the end of the oral arms that themselves transport food to the stomach.

The blue blubber is a nuisance off the coast of Australia. The number of blue blubbers on the coasts of Australia has increased tremendously over the last few years because of the absence of the predators, caused by over-fishing. These large swarms of blue blubbers are clogging the water intakes on ships and power stations, and are also ruining fishing nets and poisoning the catch.

This species is easily distinguished by its oral arms and the presence of internal cross-like design. These are actually the gonads of the blue blubber that are visible through its gelatinous body, which is semi-transparent. Although, blue blubbers usually have eight oral arms, a number of specimens have been found with just three or four oral arms. Also, the oral arms of the blue blubber have a certain three-pronged shape that makes them easy to identify.

The blue blubber uses its oral arms to capture its food. Its oral arms are lined with numerous nematocysts that contain venomous stings. When blue blubbers come in contact with a prey, they inject their venom into the prey in order to kill or paralyze it. Once the prey is immobilized, the blue blubber eats it with its tiny mouths. The blue blubber uses the same mechanism to defend itself from predatory animals. In the case of humans, the toxins in the venom of blue blubbers does not cause any harm. Very sensitive individuals may develop an itchy rash or have an allergic reaction.