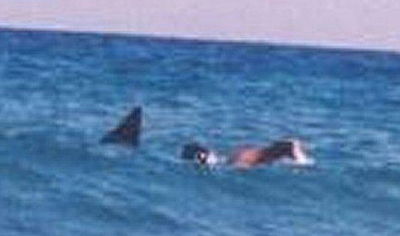 Regent Lacoursiere swimming with a Great White Shark in a professional marathon swim from the mainland of the state of Rhode Island to Block Island in 1968. Photo by Jean-Guy Racicot from escort boat

As of the 2010 census the population of 1,051 lived on the island. The Nature Conservancy added Block Island to its list of "The Last Great Places." The list consists of twelve sites in the Western Hemisphere. The island is a popular summer tourist destination and is known for its bicycling, hiking, sailing, fishing, and beaches, and site of a professional marathon swim in the 1960's.

It was host to the Blue Mind 3 Summit, organized by Dr. Wallace J. Nichols.