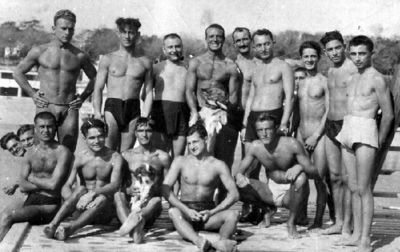 Participants in the first Galata-Varna Swimming Marathon in the Black Sea in Bulgaria in 1926. Photo by Ivan Tsanov

The Black Sea is bounded by Europe, Anatolia and the Caucasus and is ultimately connected to the Atlantic Ocean via the Mediterranean and the Aegean seas and various straits. The Bosphorus Strait connects it to the Sea of Marmara, and the strait of the Dardanelles connects that sea to the Aegean Sea region of the Mediterranean. These waters separate eastern Europe and western Asia. The Black Sea is also connected to the Sea of Azov by the Strait of Kerch and is part of the Seven Seas

The Black Sea has an area of 436,400 km2 (168,500 sq mi) and lies between Bulgaria, Georgia, Romania, Russia, Turkey, and Ukraine. It is between the Pontic Mountains to the south, the Caucasus Mountains to the east and features a wide shelf to the northwest. Important cities along the coast include Batumi, Burgas, Constanța, Giresun, Hopa, Istanbul, Kerch, Kherson, Mangalia, Năvodari, Novorossiysk, Odessa, Ordu, Poti, Rize, Samsun, Sevastopol, Sochi, Sukhumi, Trabzon, Varna, Yalta and Zonguldak.