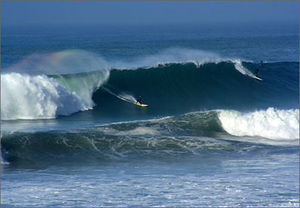 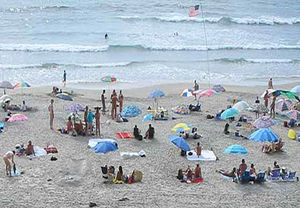 A submarine canyon funnels swells into Black's Beach, making it appealing to surfers but dangerous for inexperienced swimmers. Usually, lifeguards are at the beach until 6:00 p.m., year round. Due to budget cuts, lifeguard patrols were limited but have increased because of funding by UCSD.

Black's Beach in San Diego is the one of the largest nude beaches in the United States and is popular with Southern Californian nudists and naturists. Originally including the current Torrey Pines State Beach, Black's Beach was the first and only public nude beach in the country for several years in the mid-1970s. Because Black's Beach was traditionally recognized as a clothing optional beach, nudity is tolerated for the portion of the beach that is managed by the state park. Until 1977, the city portion of Black's Beach was posted as "swimsuit optional"; in that year, nudity was prohibited on that part of the beach.

The clothing-optional portion of Black's Beach begins about 100 yards (91 m) south of the trail head leading to the Torrey Pines Gliderport, and runs north for approximately 1.1 miles (1.8 km) to the beached steel buoy south of Flatrock Point.

The southern portion of Black's Beach is known to surfers as one of the most powerful surf breaks in Southern California. The waves gain their power due to the focusing effects of Scripps Canyon, an underwater canyon just offshore in the San Diego-La Jolla Underwater Park. Because of the sometimes large surf, fast breaking waves, and aggressive crowds, Black's is a dangerous surfing location, advisable for advanced surfers only.