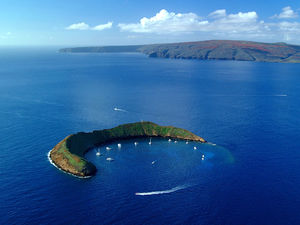 Molokini volcanic crater island with Maui in the background was the site of the Wailea Molokini Challenge, a charity swim for Best Buddies Hawaii headlined by Karen Gaffney in 2011

Best Buddies Hawai'i is a nonprofit 501(c)(3) organization dedicated to establishing a global volunteer movement that creates opportunities for one-to-one friendships, integrated employment and leadership development for people with intellectual and developmental disabilities (IDD). Its state director is Mike McCormick.

Founded in 1989 by Anthony Kennedy Shriver, Best Buddies is a vibrant, international organization that has grown from one original chapter to almost 1,500 middle school, high school, and college chapters worldwide. Best Buddies programs engage participants in each of the 50 United States, and in 50 countries around the world.

As a result of their involvement with Best Buddies, people with IDD secure rewarding jobs, live on their own, become inspirational leaders, and make lifelong friendships. Although Best Buddies has advanced tremendously in its short existence, many areas of the country and many regions of the world still lack programs to help people with IDD become part of mainstream society. With that in mind, Best Buddies is systematically implementing its 2020 Initiative, which will witness the organization’s continued significant growth, both domestically and overseas.

The Wailea Molokini Challenge in 2011 was a charity swim and charity paddle event that benefited Best Buddies Hawaii and Ka Lima O Maui. The 12-mile event raised money and awareness for the diverse population of people with disabilities on Maui.