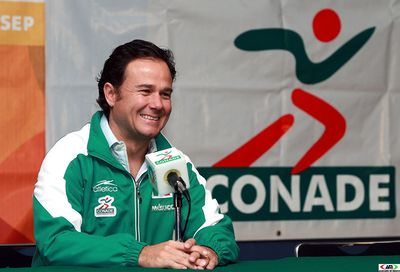 Bernardo de la Garza Herrera (born 14 October 1970 in Mexico City) is a Mexican politician and former candidate for the Partido Verde Ecologista de México (PVEM, "Ecologist Green Party of Mexico") in the 2006 presidential election. He is married to Ana María de la Garza and has one son and one daughter. He led the Mexican Swimming Federation's bid to win the 2017 FINA World Swimming Championships and is an active triathlete.

De la Garza served in the Chamber of Deputies during the LVIII Legislature (2000 – 2003), In 2003 he was elected to the Legislative Assembly of the Federal District via the proportional representation. On November 12, 2005, the PVEM formally elected him as its candidate to the 2006 presidential election, though he resigned on December 5 when the PVEM allied with the PRI. The candidate for both parties was Roberto Madrazo.

In 2009 De la Garza was designated by Alonso Lujambio as the head of the CONADE (Spanish acronym for Comisión Nacional del Deporte y Cultura Física).