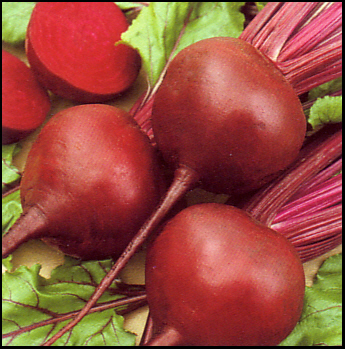 noun - Beetroot, also known as the table beet, garden beet, red beet or informally as beet, is one of the many cultivated varieties of beets (Beta vulgaris) and arguably the most commonly encountered variety in North America, Central America and Britain.

Use in Endurance Sports[edit]

A study conducted by Exeter University in the U.K. found that cyclists who drank a half liter of beetroot juice several hours before workout were able to ride 20% longer than those who drank a placebo blackcurrent juice.

Kathleen Doheny reported in WebMD on research of the whole vegetable by Margaret Murphy, MS, RD, ACSM, a Clinical Dietitian at St. Alexius Hospital in Chicago. Murphy's research showed that eating beetroot (over cranberry relish) before a workout gave runners an edge in speed (41 seconds) over a 5K run. The study was presented at the American Dietetic Association's Food & Nutrition Conference & Expo in September 2011.

Murphy tested 11 male and female recreational athletes, with an average age of 25, to eat the 200 grams of beetroot or cranberry relish 45 minutes before a 5K run. After the beetroot consumption, the runners achieved times that were 3% faster compared to their times after eating cranberry relish with a 5% faster closing over the last mile.

Beetroot is rich in nitrates that are converted into nitric oxide by the body. The nitric oxide dilates blood vessels which results in improved oxygen delivery and sustained aerobic capacity.

Beetroot is a rich source of potent antioxidants and nutrients, including magnesium, sodium, potassium and vitamin C, and betaine, which is important for cardiovascular health. It functions by acting with other nutrients to reduce the concentration of homocysteine, a homologue of the naturally occurring amino acid cysteine, which can be harmful to blood vessels and thus contribute to the development of heart disease, stroke, and peripheral vascular disease. Betaine functions in conjunction with S-adenosylmethionine, folic acid, and vitamins B6 and B12 to carry out this function.

1. Place 200 grams or about 7 ounces on a baking sheet. 2. Bake at 350 degrees Fahrenheit for 90 minutes. 3. Peel off the skin, then put the remaining beetroot in a food processor. 4. Add a tablespoon of lemon juice, 1/8 teaspoon of cinnamon, and 1/8 teaspoon of nutmeg.

The beetroot are eaten boiled either as a cooked vegetable, or cold as a salad after cooking and adding oil and vinegar, or raw and shredded, either alone or combined with any salad vegetable. The green, leafy portion of the beet is also edible. It is most commonly served boiled or steamed, in which case it has a taste and texture similar to spinach.