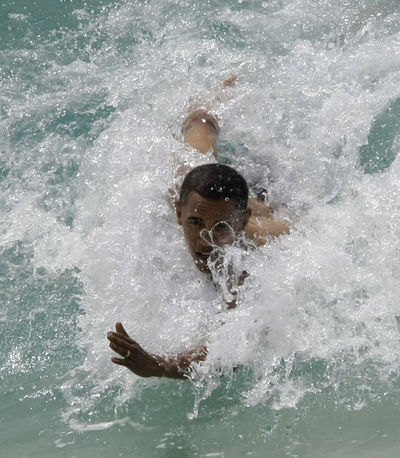 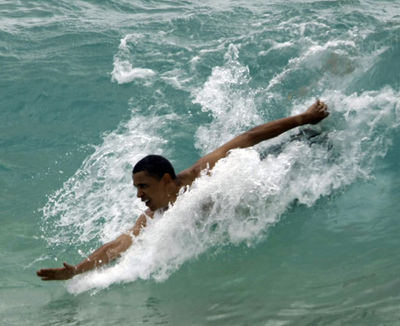 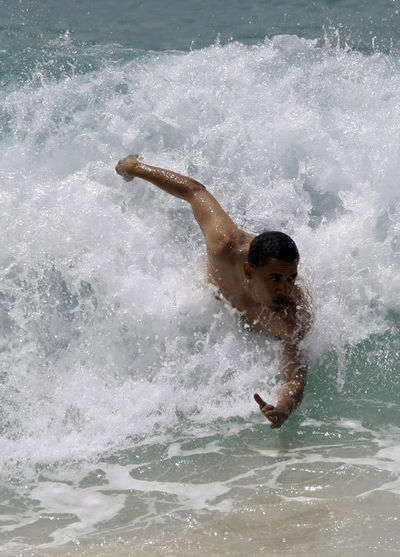 President Obama grew up in Hawaii

Barack Obama is the first African-American president of the United States, as well as the first born in Hawaii which is a major reason why he is so comfortable in the ocean.

His policy decisions have addressed the global financial crisis of 2008–2009 and have included changes in tax policies, legislation to reform the United States health care industry, foreign policy initiatives and the phasing out of detention of prisoners at the Guantanamo Bay detention camp in Cuba. He attended the 2009 G-20 London summit and visited U.S. troops in Iraq. On the tour of various European countries following the G-20 summit, he announced in Prague that he intended to negotiate substantial reduction in the world's nuclear arsenals, en-route to their eventual extinction. In October 2009, Obama was awarded the Nobel Peace Prize for "his extraordinary efforts to strengthen international diplomacy and cooperation between peoples."

Barack Obama was inaugurated on 20 January 2009. To commemorate the 200th anniversary of the birth of former President Abraham Lincoln, the same Bible that was used for Lincoln's inauguration was used in Obama's inauguration.

Obama's 100th day in office was April 29, 2009. In his first post-election interview with 60 Minutes, Obama said that he has been studying Roosevelt's first 100 days while adding, "The first hundred days is going to be important, but it's probably going to be the first thousand days that makes the difference."

Obama's first 100 days were highly anticipated ever since he became the presumptive nominee. Commentators weighed in on challenges and priorities within domestic, foreign, economic, and environmental policy.

The first piece of legislation Obama signed was the Lilly Ledbetter Fair Pay Act of 2009 on January 29, which revised the statute of limitations for filing pay discrimination lawsuits. Lilly Ledbetter joined Obama and his wife, Michelle, as he signed the bill, fulfilling his campaign pledge. On February 3, he signed the Children's Health Insurance Program Reauthorization Act (CHIP), expanding health care from 7 million children under the plan to 11 million.

After much debate, the American Recovery and Reinvestment Act (ARRA) was passed by both House and Senate on February 13, 2009. Originally intended to be a bipartisan bill, the passage of the bill was largely along party lines. No Republicans voted for it in the House, and three moderate Republicans voted for it in the Senate. The bill combined tax breaks with spending on infrastructure projects, extension of welfare benefits, and education. The final cost of the bill was $787 billion, and almost $1.2 trillion with debt service included.

After his transition period, Obama entered office with an approval rating of 82. At the end of his first week, 68% of respondents in a Gallup poll approved of how Obama was handling his job, matching the early approval ratings of Dwight D. Eisenhower and trailing only John F. Kennedy in post-World War II presidents.

On March 25, 2010, following his signing of landmark health care reform legislation into law, Obama's polling was revealed by Bloomberg to be 50%, with higher marks for relations with other countries (58%) and his running of the war in Afghanistan (54%). "Obama's approval rating is roughly equal to what Bill Clinton had at this point in his presidency, according to data maintained by Gallup (and) higher than the 45 percent Ronald Reagan recorded in April 1982" and more favorable than Democrats or Republicans office in 2010. They found Obama's approval rating was at 85% among Democrats, compared with 46% among independents and 11% among Republicans.

In his inaugural address, Obama suggested that he plans to begin the process of withdrawing from Iraq and continuing to focus on the war in Afghanistan]]. He also mentioned lessening the nuclear threat through "working tirelessly with old friends and former foes". He spoke about America's determination to combat terrorism, proclaiming America's spirit is "stronger and cannot be broken — you cannot outlast us, and we will defeat you." To the Muslim world, Obama extended an invite to "a new way forward, based on mutual interest and mutual respect". He also said the USA would "extend a hand" to those "who cling to power through corruption and deceit" if they "are willing to unclench" their fists.

In March 2011, international reaction to Muammar Gaddafi's military crackdown on rebel forces and civilians in Libya culminated in a United Nations resolution to enforce a no fly zone in Libya. Obama authorized U.S. forces to participate in international air attacks on Libyan air defenses using Tomahawk cruise missiles to establish the protective zone.

On January 27, 2009, Obama issued two presidential memoranda concerning energy policy. One directed the Department of Transportation to raise fuel efficiency standards by 2020, and the other directed the United States Environmental Protection Agency to allow individual states to set stricter tailpipe emissions regulations than the federal standard.

On February 10, 2009, Obama overturned a Bush administration policy that had opened up a five-year period of offshore drilling for oil and gas near both the Atlantic and Pacific coasts. Interior Secretary Ken Salazar has been quoted as saying, "To establish an orderly process that allows us to make wise decisions based on sound information, we need to set aside" the plan "and create our own timeline".

On May 19, 2009, Obama announced a plan to increase the CAFE national standards for gasoline mileage, by creating a single new national standard that will create a car and light truck fleet in the United States that is almost 40 percent cleaner and more fuel-efficient by 2016 than it is today, with an average of 35.5 miles per gallon.

On March 30, 2010, Obama partially reinstated Bush administration proposals to open certain offshore areas along the Atlantic coastline, the eastern Gulf of Mexico and the north coast of Alaska to oil and natural gas drilling. The proposals had earlier been set aside by President Obama after they were challenged in court on environmental grounds.

On May 27, 2010, Obama extended a moratorium on offshore drilling permits after the April 20, 2010 Deepwater Horizon oil spill which is considered to be the worst oil spill in U.S. history.

Once the stimulus bill was enacted, health care reform became Obama's top domestic priority. On July 14, 2009, House Democratic leaders introduced a 1,000 page plan for overhauling the US health care system, which Obama wanted Congress to approve by the end of the year.

The U.S. Congressional Budget Office (CBO) estimated the ten-year cost to the federal government of the major insurance-related provisions of the bill at approximately $1.0 trillion. In mid-July 2009, Douglas Elmendorf, director of the CBO, testified that the proposals under consideration would significantly increase federal spending and did not include the "fundamental changes" needed to control the rapid growth in health care spending. However after reviewing the final version of the bill introduced after 14 months of debate the CBO estimated that it would reduce federal budget deficits by $143 billion over 10 years and by more than a trillion in the next decade.

After much public debate during the Congressional summer recess of 2009, Obama delivered a speech where he addressed concerns over his administration's proposals. The bill, which includes over 200 Republican amendments, was passed without a single Republican vote. On 23 March 2010, President Obama signed the bill into law. Immediately following the bill's passage, the House voted in favor of a reconciliation measure to make significant changes and corrections to the Patient Protection and Affordable Care Act, which was passed by both houses with two minor alterations on 25 March 2010 and signed into law on 30 March 2010.

Videos of the President in the Open Water[edit]