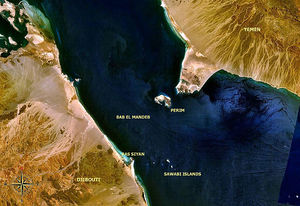 Bab-el-Mandeb, the Gate of Grief or Gate of Tears between Yemen and Djibouti 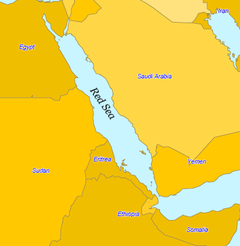 The Bab-el-Mandeb (variously transliterated Mandab or Mandib, and with article "el-" given also as "al-", with or without connecting dashes) meaning "Gate of Grief" in Arabic (باب المندب or sometimes Gate of Tears), is a strait located between Yemen on the Arabian Peninsula, Djibouti and Eritrea, north of Somalia, in the Horn of Africa, and connecting the Red Sea to the Gulf of Aden. It is sometimes called the Mandab Strait in the English language.

The strait derives its name from the dangers attending its navigation, or, according to an Arab legend, from the numbers who were drowned by the earthquake which separated Asia and Africa.

Bab el-Mandab acts as a strategic link between the Indian Ocean and the Mediterranean Sea, via the Red Sea and the Suez Canal. In 2006, an estimated 3.3 million barrels (520,000 m3) of oil passed through the strait per day, out of a world total of about 43 million barrels per day (6,800,000 m3/d) moved by tankers.

The distance across is about 20 miles (30 km) from Ras Menheli in Yemen to Ras Siyyan in Djibouti. The island of Perim divides the strait into two channels, of which the eastern, known as the Bab Iskender (Alexander's Strait), is 2 miles (3 km) wide and 16 fathoms (30 m) deep, while the western, or Dact-el-Mayun, has a width of about 16 miles (25 km) and a depth of 170 fathoms (310 m). Near the coast of Djibouti lies a group of smaller islands known as the "Seven Brothers". There is a surface current inwards in the eastern channel, but a strong undercurrent outwards in the western channel.