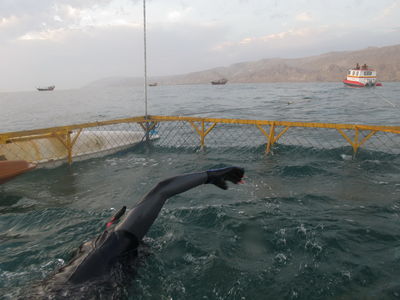 noun - An assisted stage relay swim is a type of multi-person relay conducted over two or more consecutive days where the distance of the individual stages can vary on each day and the starting point of the subsequent stages begins at the same point as the finish of the previous day's swim. The swim can be done in whole or in part with fins, wetsuits, hand paddles, protective swimwear, a shark cage, jellyfish protection (including a cage) or any other kind of artificial aid or propulsion.

The overall final time is the culmination of the swimming times of the individual stages. The overall final distance is the distance measured from the starting point to the finish point in miles, nautical miles or kilometers. The cumulative swim time (i.e., total time spent in the water) is different from the cumulative time (time from the start to the finish inclusive of rest time between stages). The finish on the final day can be at the same location or at a different location than the start on the first day.

A traditional Stage swim is different from a Continuous stage swim. In a traditional Stage swim, the swimmer begins the swim on each day at the exact point where the swim on the previous day was finished. In a Continuous stage swim, the swimmer is allowed to float with the currents and tides in an accompanying marine vessel and begin the swim on each day at whatever point he/she wishes.

In contrast, during an unassisted stage swim, a swimmer is not allowed to use fins, wetsuits, hand paddles, protective swimwear such as a stinger suit, a shark cage, jellyfish protection (including a cage) or any other kind of artificial aid, propulsion or flotation device.

In an assisted stage swim, the swimmer does not have to swim 24-hour period due to water or weather conditions.

The assisted stage swim from Los Angeles to San Diego was conducted over ten days.