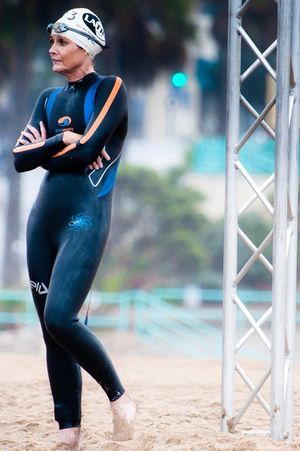 Eney Jones in a Blueseventy wetsuit made of neoprene 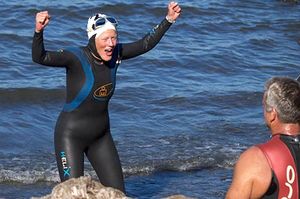 noun - Neoprene is the DuPont trade name for its brand of polychloroprene. Neoprene or polychloroprene is a family of synthetic rubbers that are produced by polymerization of chloroprene. Neoprene in general has good chemical stability, and maintains flexibility over a wide temperature range. It is used in a wide variety of applications, such as laptop sleeves, orthopedic braces (wrist, knee, etc.), electrical insulation, liquid and sheet applied elastomeric membranes or flashings, and wetsuits and tech suits used in the swimming, scuba diving, surfing and triathlon worlds.

USA Triathlon has the following rules related to Wetsuits:

All Ironman and Ironman 70.3 events sanctioned by the World Triathlon Corporation abide by the following wetsuit rules: