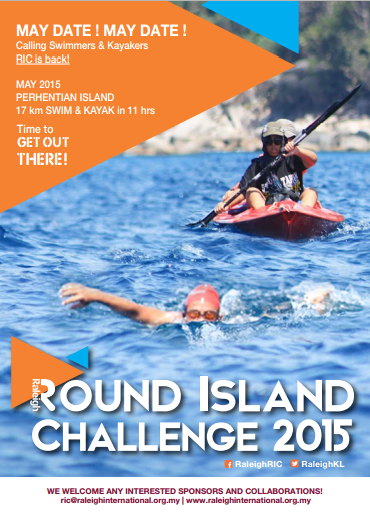 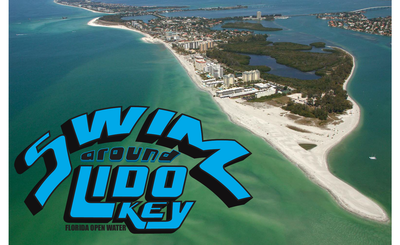 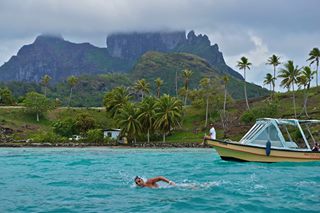 Dr. Sean O'Connell setting off on the world's first island circumnatation around Bermuda as documented by the Guinness Book of World Records

Sean O’Connell coined the term circumnatation in 1976 as a more linguistically accurate definition of a solo swim around an island.

Most of the potential circumnavigations around the world have yet to be planned or attempted yet.

Popular Circumnavigations around the world[edit]

1. Manhattan Island
• Location: Around Manhattan Island in New York City, New York, U.S.A.
• Course: Counter-clockwise circumnavigation of Manhattan Island, starting and finishing near Wall Street
• Distance: 28.5 miles (45.8K)
• Date of Annual Race: July
• Description: Manhattan Island Marathon Swim is limited to 25 solo swimmers and 18 relay teams that start and finish at Battery Park City. Race sells out in 45 minutes. Race first held in 1927. Substantial surface chop and strong tidal pull are possible. Water temperature varies between 64-67°F (17-19°C). Salt water around Manhattan Island may also include random jetsam and flotsam. A Qualifying Swim must be completed before application will be accepted. The premier event of the NYC Swim Series that conducts numerous other open water events and has attracted over 14,000 participants in more than 110 events.


2. Alcatraz Island
• Location: San Francisco Bay, California, U.S.A.
• Course: From Aquatic Park near Fisherman’s Wharf in San Francisco to Alcatraz Island and back
• Distance: 3.25 miles (5.2K)
• Date of Annual Race: July
• Description: Swim Around the Rock requires extensive open water experience due to the cold water (under 60°F or 15.5°C), changing tides and fast currents, but spectacular view of the Golden Gate Bridge, Fisherman’s Wharf and the San Francisco downtown skyline will delight the swimmers throughout the event.


3. Pennock Island
• Location: In Ketchikan, Alaska, U.S.A.
• Course: Around Pennock Island in the Tongass Narrows
• Distance: 8.2 miles (13.2K)
• Date of Annual Race: August
• Description: The Pennock Island Challenge is a current-assisted course sheltered from large surf everywhere except the sound end. Water temperature ranges from mid-50s°F to low 60s°F (12.7 to 16.6°C). Air temperature will range from the mid-60s°F to mid 80s°F (18-29°C). Swimmers can enter as solo and as members of a relay. Wetsuits are allowed, but will have their own awards category. It is a fundraiser for the American Diabetes Association.


4. Sandycove Island
• Location: Kinsale, County Cork, Ireland
• Course: Counter-clockwise circumnavigation around the island
• Distance: Up to 1.25 miles (2K) depending on how close one swims to the island
• Date of Annual Race: September with training swims made from late winter when water can be 45°F to late summer
• Description: The Old Head of Kinsales shelters Sandycove Island from the prevalent westerly winds. Swim at high tide for the easiest swim. Low tide exposes hidden reefs and a beach at the base of the slipway. Medium currents at mid-tide can present problems for slower swimmers. Nearly 150 swims are scheduled each year at the primary training spot for open water swimmers and triathletes. It is an excellent training location for those preparing for an English Channel attempt. Clean crisp water with sunken reefs and waving sea plants clearly visible.


9. Absecon Island
• Location: Absecon Island, Atlantic City, New Jersey, U.S.A.
• Course: Demanding swim with strong tides and current, varying conditions and water temperatures that can range from 55°F (12.7°C) in the open ocean to 85°F (29.4°C) in the back bay.
• Distance: 22.5 miles (37K)
• Traditional Date of Race (no longer held): August
• Description: The Atlantic City Around-the-Island Marathon Swim was a traditionally one of the best professional marathon swims in the world, held 54 times since 1954, annually attracting the world’s best professional marathon swimmers. It has been called the hardest race in the world because conditions vary so greatly. Escort boats are rowed by local lifeguards.


10. Popoia Island
• Location: Off of Kailua Beach, Oahu, Hawaii, U.S.A.
• Course: Local swims around a low-lying uninhabited island near one of the best beaches in Hawaii. The island is a bird sanctuary and is called “Flat Island” by the locals.
• Distance: 1.2 miles (2K)
• Date: Throughout the year
• Description: Kailua Beach Park is always considered one of the top beaches in the world on the northern side of Oahu. Clean white sand beach with warm tropical water up to 80°F (26.6°C). The island has holes where sea birds make their nests. Parking is available at Kailua Beach Park, about a 20-minute drive from Waikiki.


11. Manana Island
• Location: Off of Makapuu Beach, Oahu, Hawaii, U.S.A.
• Course: Challenging, potentially dangerous swim around an incredibly gorgeous uninhabited seabird sanctuary island near one of the most popular beaches in Hawaii. The island is near one of the most famous body surfing beaches on Oahu and is called “Rabbit Island” by the locals.
• Distance: 1.2 miles (2K)
• Date: Throughout the year
• Description: The Makapuu Beach Park nearly always has rough water conditions and strong currents and sharks are an ever-present danger. Surfers and kayakers have been attacked by sharks in this area and extreme caution is strongly advised. If no experienced and vigilant escorts are available, swimmers are advised to avoid swimming in this area.


12. Mokulua Islands
• Location: off of Kailua Beach Park, Oahu, Hawaii, U.S.A.
• Course: Circumnavigation around an incredibly beautiful tropical twin islands off of one of the most beautiful beaches in the world. Commonly known as the Twin Islands, the Moku Nui and Moku Iki are designated seabird sanctuaries that are popular among kayakers.
• Distance: 1.5 miles (1.2K)
• Date: Throughout the year
• Description: Crystal clear azure blue waters and lack of waves makes this an easy swim. Finish on a powdery white sand beach that has been designate as the Best Beach in America. Area is protected by an off-shore coral reef, but the danger of marine life is always present. If no experienced and vigilant escorts are available, swimmers are advised to avoid swimming in this area.


13. Santa Catalina Island
• Location: Rocky island 21 miles (34K) off of the coast of Southern California, U.S.A.
• Course: Extremely demanding swim in cold water with strong currents and potentially high waves and abundant marine life. Island is 22 miles (35K) long and 8 miles (13K) wide.
• Distance: At least 50 miles (80.5K)
• Date: Extraordinarily rare attempts can be made from July to September
• Description: Population of island is under 4,000 people. Threat of sharks is present. Only two circumnavigations has been authenticated (Cindy Cleveland and Forrest Nelson, both of Southern California).


15. Isle of Wight
• Location: Island in the English Channel between 3-5 miles from the south coast of Great Britain
• Course: Demanding swim in cold water with strong currents
• Distance: 56 miles (90K)
• Date: Attempts can be made in July or August
• Description: Known for its natural beauty, the Isle of Wight has been a holiday resort since Victorian times. First completed by Kevin Murphy of Great Britain in 1971 in 26 hours and 51 minutes.


16. Yonaguni Island
• Location: Okinawa, Japan (near Taiwan)
• Course: Demanding swim around incredibly beautiful tropical island near Japan and the westernmost point of Japan
• Distance: 18 miles (29K)
• Date: Attempts generally made in spring or late fall, preferably October
• Description: Population of island is under 1,700 people. Thousands of hammerhead sharks congregate near tips of island within view of swimmers. Water temperature about 80°F (26.6°C) where it was first completed in 1993 by Steven Munatones in 7 hours and 8 minutes.


17. Round Christiansborg Swim
• Location: Copenhagen, Denmark
• Course: Five 2K loops in Fredericksholm's Canal around the island that houses the palace of the Danish Parliament. Swimmers will swim through canals alongside Holmen Church, the Danish Parliament, the Danish Ministry of Culture, royal riding stables and near the central shopping area of Copenhagen.
• Distance: 6.2 miles (10K)
• Date of Annual Race: August
• Description: The Round Christiansborg Swim is a popular Danish swim for amateurs. Water temperature is between 64-72°F (18-22°C)


18. Estero Island
• Location: Fort Myers, Florida, U.S.A.
• Course: 25K loop around Estero Island on the west coast of Florida
• Distance: 16 miles (25K)
• Date: June
• Description: Recent site of the Open Water Festival and USA Swimming National 25K Championships. It is a warm-water swim in the clear waters of Florida. The Open Water Festival that has numerous events from the 1-mile Dash for Cash to the 10K.


20. Mercer Island
• Location: Island located in Lake Washington in between Seattle and the headquarters of Microsoft in Redmond, Washington, U.S.A. • Course: Incredible views of the natural beauty of the American Northwest
• Distance: Approximately 16 miles (25K)
• Date: July or August
• Description: Mercer Island is the most populated island in a lake in the Americas and is a calm swim unless the winds come up. Water temperature is in the mid 70ºs.


21. Seward Island
• Location: Island located in Lake Washington in between Seattle and the Microsoft headquarters in Redmond, Washington, U.S.A. • Course: Incredible views of an old growth forest and the natural beauty of the Seattle area
• Distance: 3.2 miles (5K)
• Date: July or August
• Description: Relatively easy, quite comfortable and extremely enjoyable swim with water in the mid 70ºs during summer.


23. Valentia Island
• Location: Island located off the western coast of Ireland
• Course: Scenic Irish terrain that requires careful navigation due to tides and currents
• Distance: 16+ miles (25.7K) of coastline
• Date: July and August
• Description: First circumnavigation swim successfully completed in July 2008 by Ned Denison in 8 hours 52 minutes. Jellyfish can be abundant when water temperature rises above 55ºF (13ºC). Numerous fish species and basking sharks are popular among fishermen in the area. Water temperature expected to be under 60ºF (15ºC). Circumnavigation should be carefully planned for optimal tidal assistance.


24. Mackinac Island
• Location: Island located at the eastern end of the Straits of Mackinac in Lake Huron, one of the Great Lakes of North America.
• Course: Normally a flat-water swim unless strong wind conditions occur
• Distance: 12 miles around the 3.8 square miles or 9.8 square kilometer island
• Date of Annual Race: Great Turtle Relay Swim Around Mackinac Island is held in July
• Description: First circumnavigation completed in 2004 by Dick Buist, Dennis Barber, Dave Newton and Ed Gilde completed the first circumnavigation relay swim in 5 hours and 11 minutes. A National Historic Landmark, the island is small and part of the state of Michigan and is can be done "carbon-neutral style" (i.e., relay swimmers rotate in the water every 20 minutes. When it is not their turn to swim, the swimmers walk around the island. Each relay member swims for 20 minutes and then walks for 60 minutes until they finish the approximately 11-12 mile circumnavigation of Mackinac Island) in the 63˚F (17˚C) water.


27. Robben Island
Location: An island in Table Bay, 6.9K west of the coast of Bloubergstrand, Cape Town, South Africa. Robben Island is roughly oval in shape and flat and only a few meters above sea level.
• Distance: 6.9K
• Date: Solo swims and races are held during the summer
• Description: Hundreds of people have swum from and a few have swum around the island. It is surrounded by wild life and marine life. The name is Dutch for "seal island".

Video of Circumnavigation Relay in Indonesia[edit]