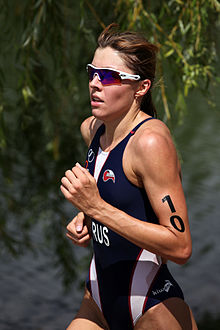 Irina Alekseyevna Abysova (Russian: Ирина Алексеевна Абысова) is a Russian open water swimmer and triathlete who won the 2003, 2007, 2009 and 2010 Russian Triathlon Championships and she took part in the 2008 and 2012 Olympic Games as a triathlete. She is the winner of the 2013 ITU Aquathlon World Championship and took part in 51 ITU competitions, achieving 16 top ten positions

noun - Aquathlons consist of a continuous race or attempted involving swimming and running. It can be a swim-run-swim, a run-swim-run, a swim-run, run-swim, or any number of stages involving swimming and running. The International Triathlon Union (ITU) and its member federation organizations sanction competitions and govern the sport of aquathlon. The ITU and USA Triathlon sanctioning organizations generally use the term aquathlon. The ITU Aquathlon World Championship are regularly held.

Aquathlons have been around in various forms since the early 20th century in ocean lifeguard competitions. The National Surf Lifesaving Association of America, formed in 1965, held its first national competition that year and the events included a run-swim-run. The modern international standard lifeguard distance is 400 meter run - 400 meter swim - 200 meter run.