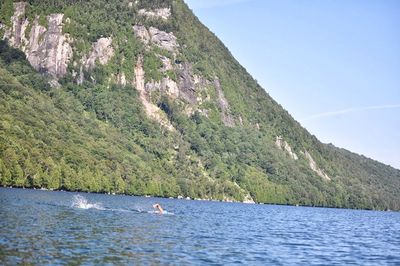 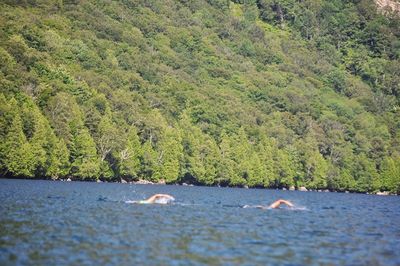 Aquaman Even Up is a triathlon of the Kingdom Triathlon Series held annually in August and includes a a 3.5-mile open water swim in Lake Willoughby in Vermont followed by a 34-mile bike and a 13.1-mile run. It is conducted on the same day as the Ollie Even Up triathlon (1.75-mile swim + 15-mile bike + 10 km run) and the Kingdom Sprint triathlon (500-yard swim + 13-mile bike + 5-mile run).

Lake Willoughby is a lake in the town of Westmore in Orleans County in the northeast section of Vermont, United States. Willoughby is a glacial lake over 300 feet (91 m) deep in places, the deepest lake entirely contained in the state. The lake's southern end is surrounded by the Willoughby State Forest. This state park includes Mount Pisgah, Mount Hor, and Bartlett Mountain. It is approximately 4.75 miles long. The lake is known for its clarity and chilly temperature. Because of its depth, it freezes later than other lakes in the Northeast Kingdom.