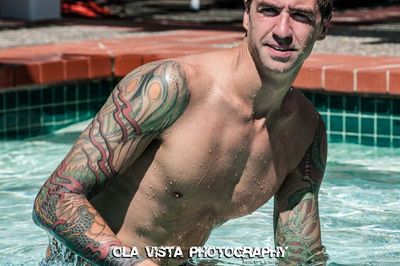 Anthony Ervin (born 26 May 1981) is an American Olympic gold medalist, former world record holder in the 50 freestyle, and former world champion in the 50 and 100 freestyle who has participated in the Swim Miami open water swimming competition organized by Jonathan Strauss.

In the 2000 Sydney Olympic Games, Ervin swam to a gold in the 50m freestyle becoming the fastest man on the planet and earned a silver medal as a member of the second-place United States relay team in the 4×100-meter freestyle event. After winning the Olympic gold, 2 world championships, and 7 NCAA titles, he retired at the young age of 22. Ervin then spent several years traveling the world and exploring other interests, including his higher education, music, tattoos, teaching people all over the world about swimming, and tsunami flood relief.

He began to train again in 2011 and competed in the 50m freestyle event at the 2012 London Olympics where he placed fifth. At the 2016 Rio Olympics, 16 years after his first Olympic gold medal, he won the event for the second time, at the age of 35, becoming the oldest individual Olympic gold medal winner in swimming.

His vision is to use his experiences and his platform as a chance to give back and inspire people of all ages to live the life they love. His return to the swimming world has already caught the attention of many major publications including a recent articles in Sports Illustrated, Rolling Stone, The Guardian, The New York Times and CNN.

Tony’s story is especially unique in that his family tree represents a broad demographic of Jewish, Native American, and African American decent. He truly embodies the diversity of our modern world. Over the years he has grown to embrace his place in the world as an opportunity to reach out and try to give back. He auctioned off his Gold medal on eBay and donated the funds to tsunami relief in Southeast Asia. He was also the current spokesperson for the International Water Safety Day that reached over a quarter million people last spring. This inaugural water safety day partnered with US Rowing, the Boys and Girls Clubs of America, and USA Swimming member clubs nationwide.