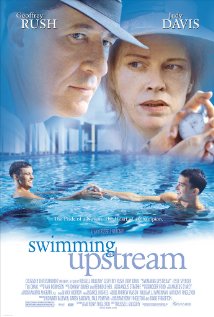 Swimming Upstream about the life of Tony Fingleton

Anthony 'Tony' Fingleton is a former Australian swimmer. He won silver medal in 1962 British Empire and Commonwealth Games. He was invited to participate in 1964 Tokyo Olympic Games, but instead accepted a scholarship to study at Harvard University. He remained in the USA after graduation and has become a screenwriter and movie producer, including the 1991 Rik Mayall film Drop Dead Fred.

In 2003 movie director Russell Mulcahy made a biographical film about Tony, called Swimming Upstream, based on his autobiography. Tony Fingleton was played by Jesse Spencer and Harold, his father and chief antagonist, by Geoffrey Rush. Swimming Upstream shows the life of Fingleton from childhood to adulthood, and dealing with a topsy-turvy family. It is based on Fingleton's autobiography of the same name.