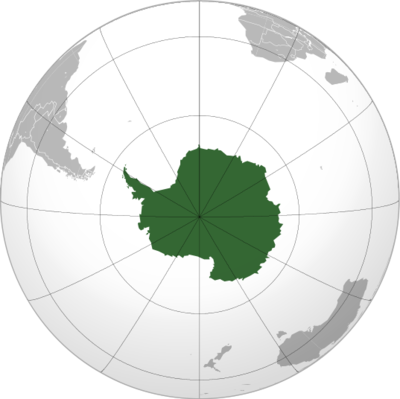 Antarctica 2020, a series of ice swimming challenges and environmental swims inside the Antarctic Circle (66°33′46.5″ south) to celebrate Lynne Cox's pioneering Antarctica 1.7 km swim in Neko Bay in 2002 and to celebrate the 200-year anniversary of the discovery of Antarctica by Russian explorer Fabian Gottlieb Thaddeus von Bellingshausen 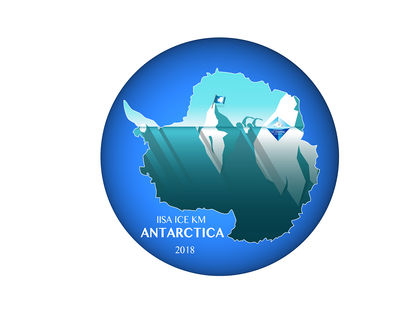 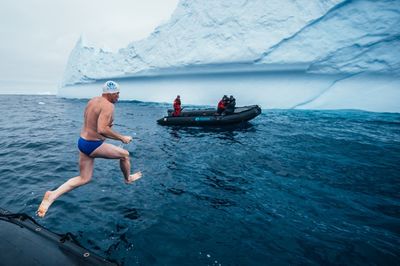 Lewis Pugh doing the Five Swims In Antarctica for 1 Reason 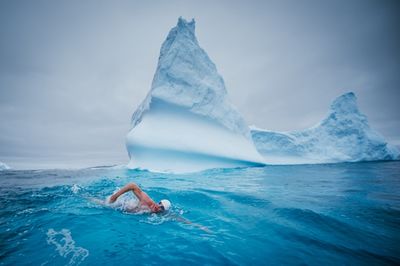 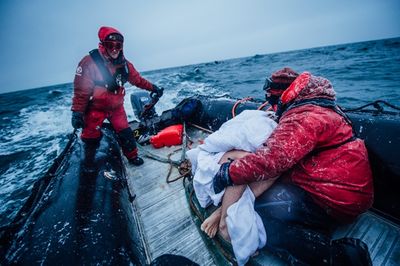 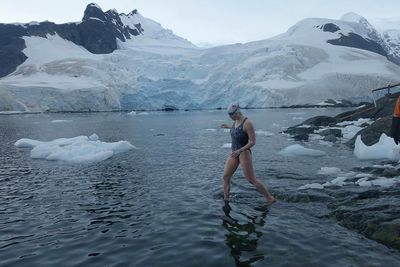 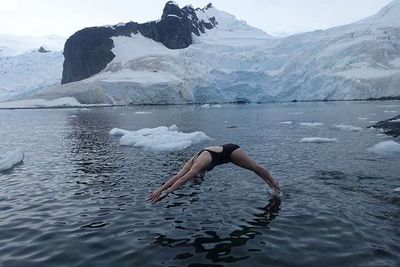 Locations of the Ice Sevens swims around the world, including the Southern Ocean, governed and ratified by the International Ice Swimming Association 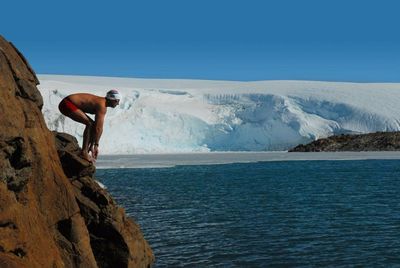 Antarctica is Earth's southernmost continent, encapsulating the South Pole. It is situated in the Antarctic region of the Southern Hemisphere, almost entirely south of the Antarctic Circle, and is surrounded by the Southern Ocean. At 14.0 million km2 (5.4 million sq mi), it is the fifth-largest continent in area after Asia, Africa, North America, and South America. For comparison, Antarctica is nearly twice the size of Australia. About 98% of Antarctica is covered by ice that averages at least 1 mile (1.6 km) in thickness.

Antarctica, on average, is the coldest, driest, and windiest continent, and has the highest average elevation of all the continents. Antarctica is considered a desert, with annual precipitation of only 200 mm (8 inches) along the coast and far less inland. The temperature in Antarctica has reached −89 °C (−129 °F). There are no permanent human residents, but anywhere from 1,000 to 5,000 people reside throughout the year at the research stations scattered across the continent. Only cold-adapted organisms survive there, including many types of algae, animals (for example mites, nematodes, penguins, seals and tardigrades), bacteria, fungi, plants, and protista. Vegetation where it occurs is tundra.

Although myths and speculation about a Terra Australis ("Southern Land") date back to antiquity, the first confirmed sighting of the continent is commonly accepted to have occurred in 1820 by the Russian expedition of Fabian Gottlieb von Bellingshausen and Mikhail Lazarev. The continent, however, remained largely neglected for the rest of the 19th century because of its hostile environment, lack of resources, and isolation.

The Antarctic Treaty was signed in 1959 by 12 countries; to date, 47 countries have signed the treaty. The treaty prohibits military activities and mineral mining, prohibits nuclear explosions and nuclear power, supports scientific research, and protects the continent's eco-zone. Ongoing experiments are conducted by more than 4,000 scientists from many nations.

Antarctica is part of Continents Seven, a series of 7 different solo open water swims that is completed in all of the seven continents of Planet Earth either (1) within one year, or (2) over the course of one's career. The 7 different open water swims must be performed on all the world's main continuous expanses of land: Africa, Antarctica, Asia, Australia (or Oceania), Europe, North America, and South America.

Antarctica was site of the Antarctica 2020 International Swim that was nominated for the 2020 WOWSA Awards in the World Open Water Swimming Offering of the Year category with the following nomination: The Southern Ocean is at the bottom of the world surrounding the continent of Antarctica. Inhospitable to humans, but remarkably, Ger Kennedy organized a series of ice swims accessible around the ice-covered tundra to some of the most hardened ice swimmers on the planet. Antarctica 2020 International Swim was held inside the Antarctic Circle to celebrate Lynne Cox's pioneering Antarctica swim in 2002 and enable people to swim short distances or Polar Ice Miles. From Argentina, the Polar Swimming Quest set off by ship and stopped in the Bellingshausen Sea and the Weddell Sea over a few weeks. 12 swimmers entered the cold waters of Antarctica with bioprene only with three major swims safely recorded. Cath Pendleton set a world record in Hanusse Bay with a 32:54 Zero Ice Mile in 0.03°C water and -3.2°C air. Paul Eugen Dorin Georgescu set another world record in Hanusse Bay in 0.0°C water with 22 minute 44 second Zero Ice Mile. Two days later, Ger Kennedy swam another Zero Ice Mile in Paradise Bay in 0.53°C water and -1.10°C air in 34 minutes 2 seconds. For safely organizing swims by Kathryn Pratschke, Redy Redfern, Dee Newell, Jane Hardy, Tiffiny Quinn, Michelle White, Una Campbell, Martina Ring, Anne O'Donovan, Matías Ola, and Alice Kelliher in Antarctica with the help of Sean Cullen and Dimcea Lulian Zamfir, for encouraging marine conservation awareness while encountering challenging conditions, and for enabling the extension of the known physical boundaries for everyone involved, the Antarctica 2020 International Swim by Ger Kennedy is a worthy nominee for the 2020 World Open Water Swimming Offering of the Year.