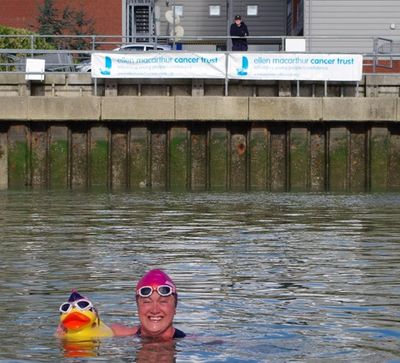 Anna Wardley is a marathon swimmer from Great Britain who completed 2 of the Oceans Seven challenges: the English Channel in 2007 and the Strait of Gibraltar on 6 April 2010 in 5 hours 59 minutes. She has solo competed at the World Ice Swimming Championships on the Finnish-Russian border, in the Hellespont Race from Europe to Asia, the Midmar Mile in South Africa, and in the 21-mile Double Windermere in the Lake District.

Before her first English Channel swim in 2007, Anna was an occasional pool swimmer, logging just 40 lengths, twice a week in her local pool.

Wardley also created and is attempting the Five Island Swim Challenge, a series of five marathon swims totaling 150 miles around Dragonera (Mallorca (10 km in Spain), Portsea (21 km in Hampshire, UK), Island of Jersey (66 km in 11 hours 53 minutes in the Channel Islands), Tiree (Inner Hebrides, Scotland) and the Isle of Wight (Solent, UK). She became a member of the 24-hour club when she completed a circumnavigation around the Isle of Wight in 26 hours 33 minutes.

The 2016 Balearic Swim Challenge is a 215 km challenge that involves three stages linking Menorca and the Spanish mainland. The first, from Menorca to Mallorca, ended in hospitalization for Wardley due to innumerable jellyfish stings.