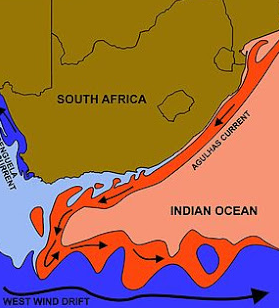 The course for the Great Shark Swim is along the warm Agulhas Current that runs along the east coast of South Africa that is formed by the confluence of the warm Mozambique Current and East Madagascar Current, which meet southwest of Madagascar

Angra Pequena is the escort pilot for the Great Shark Swim, a 100 km charity swim organised by Madswimmer along the fast Agulhas Current in South Africa with an estimated finish time of 8-10 hours along the KwaZulu Natal Coast.

The course will start near the Port Shepstone Coast, 10 km in from the eastern shoreline of South Africa, and end at Mbotyi, Eastern Cape in South Africa. The current at the start moves at 9 km per hour. With an average swim speed of 3.3 km per hour, the total swim speed is expected to be 12.3 km per hour, which means the pod of 12 open water swimmers will complete the 100 km course in over 8 hours. The charity swim aims to create awareness of shark and ray species such as blue sharks, mako sharks, dusky sharks, and bronze whaler sharks that are targeted in long-line fishing gear set across the Agulhas Current, and smaller shark and ray species that are caught as bycatch in trawl fisheries.