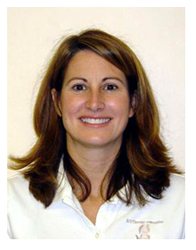 Dr. Tate is the lead author and Recipient of the Excellence in Clinical Inquiry Award for 2010 best clinical publication in the Journal of Orthopedic & Sports Physical Therapy on Shoulder Impingement Syndrome. She received a grant from United States Masters Swimming and studied shoulder pain in 236 swimmers aged 8-77. This research, which she did with her graduate physical therapy students at Arcadia University, was accepted by the Journal of Athletic Training and is due to be published later this year. It includes data from five Masters swimming teams. The paper is titled Risk Factors Associated with Shoulder Pain and Disability Across the Lifespan of Competitive Swimmers. She has also completed a study which is pending publication over the next few months in the Journal of Strength and Conditioning research, Effects of Bone-Conducted Music on Swimming Performance and Enjoyment, which was research performed on collegiate and masters swimmers.

Dr. Tate received a grant from the American Physical Therapy Association, Orthopedic Section, for her doctoral research, which was on shoulder pathology in athletes. She has presented her research at the University of Pennsylvania’s Shoulder and Elbow Update 2006 and at the American Physical Therapy Association’s Combined Section Meeting in Boston in February, 2007. She has recently presented Scapula Dysfunction: Assessment and Management at the 2008 Philadelphia Meeting of Surgery and Rehabilitation of the Hand. Her original research article “Effect of the Scapula Reposition Test on Shoulder Impingement Symptoms and Elevation Strength in Overhead Athletes” was published in January 2008 in the Journal of Orthopedic and Sports Physical Therapy. She has two additional articles on classifying shoulder movement patterns that have been accepted by the Journal of Athletic Training and are pending publication.

She is currently conducting a survey on swimmer's shoulder together with Shana Harrington, PT, PhD.